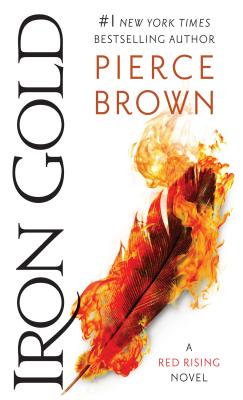 By Pierce Brown
$32.99
Not Available In-Store - Usually Ships from Warehouse in 1-5 Days

The wait is over, fellow Howlers! Pierce Brown continues Darrow's story but he now widens the narrative scope to include more characters in the Solar System, expanding our points of view with new characters and old. It's been ten years since the Rising and everyone is tired of fighting. Darrow sets out on a rogue mission to take down the powerful Ash Lord whom he believes to be the last major threat to the tenuous accords between Colors. Alliances that were once new and strong now strain against the passing of a decade. There is civil unrest in the Sovereign's new Republic, fueled by the Reaper’s unfulfilled promises. Iron Gold shows the gritty after-effects of a rebellion won and a war started, that life only get harder from there. Beware, you will need emotional support within reach for many chapters. There's plenty of swearing as well as heart wrenching displays of injustice. I love these books because of the exploration of humanity’s relationship with power and ethics, and of course pure, adrenaline-filled unpredictability.

A decade ago Darrow was the hero of the revolution he believed would break the chains of the Society. But the Rising has shattered everything: Instead of peace and freedom, it has brought endless war. Now he must risk all he has fought for on one last desperate mission. Darrow still believes he can save everyone, but can he save himself? Red Rising was the story of the end of one universe, and Iron Gold is the story of the creation of a new one.

Pierce Brown is the #1 New York Times bestselling author of Red Rising, Golden Son, Morning Star, and Iron Gold. While trying to make it as a writer, Brown worked as a manager of social media at a startup tech company, toiled as a peon on the Disney lot at ABC Studios, did his time as an NBC page, and gave sleep deprivation a new meaning during his stint as an aide on a U.S. Senate campaign. He lives in Los Angeles, where he is at work on his next novel.
My Account • Sign In • Sign Out • Register
NEW & USED BOOKS
AUTHOR EVENTS • GIFTS
Tempe
6428 South McClintock Drive
480.730.0205
[Google Map]
10am-7pm daily