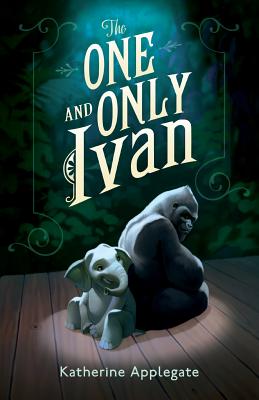 We should all be so lucky to have a friend like Ivan. He keeps his word. He listens. He cheers up his pals when they are sad. He accepts every one of them just the way they are. Plus he is a gorilla and an artist....which would make having him as a friend that much more fun! This book is his autobiography. It is at heart, a story of friendships--albeit unlikely ones. Ivan lives in a cage at a roadside mall, alongside his buddies--Stella, an aging elephant and Bob, a stray dog. He has lived there 27 years. He has come to accept his lot in life. He is not a complainer, and he takes joy in small pleasures like his tire swing. But old memories of a different life come to the surface with the arrival of a new member to the sideshow.. She will make Ivan reconsider his purpose, and ultimately change his life and the lives of his friends. This is a heartwarming book that made me think about my own close friendships. It is a reminder not to take any of them for granted, and to appreciate the differences that make each one of them special. It is also a reminder to take note of the beauty around us, and to make each and every day a work of art--even if the world is just offering up mud and dirt!

“Ivan, a gorilla, has spent most of his life with humans and the other animals at the Exit 8 Big Top Mall and Video Arcade. His memory of life before humans and cages is hazy, until a terrified young elephant joins him and he starts to remember the importance of family and belonging. A wonderful read, full of heart.”
— Lisa Fabiano, Wellesley Books, Wellesley, MA

Winner of the Newbery Medal and a #1 New York Times bestseller This stirring and unforgettable novel from renowned author Katherine Applegate celebrates the transformative power of unexpected friendships. Inspired by the true story of a captive gorilla known as Ivan, this illustrated novel is told from the point of view of Ivan himself. Having spent 27 years behind the glass walls of his enclosure in a shopping mall, Ivan has grown accustomed to humans watching him. He hardly ever thinks about his life in the jungle. Instead, Ivan occupies himself with television, his friends Stella and Bob, and painting. But when he meets Ruby, a baby elephant taken from the wild, he is forced to see their home, and his art, through new eyes. The One and Only Ivan was hailed as a best book of the year by Kirkus, School Library Journal, and Amazon, demonstrating it is a true classic in the making. In the tradition of timeless stories like Charlotte's Web and Stuart Little, Katherine Applegate blends humor and poignancy to create Ivan's unforgettable first-person narration in a story of friendship, art, and hope. An author's note depicts the differences between the fictional story and true events.