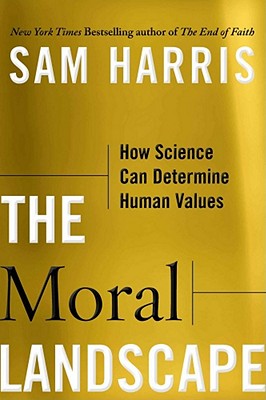 
Sam Harris’s first book, The End of Faith, ignited a worldwide debate about the validity of religion. In the aftermath, Harris discovered that most people—from religious fundamentalists to nonbelieving scientists—agree on one point: science has nothing to say on the subject of human values. Indeed, our failure to address questions of meaning and morality through science has now become the most common justification for religious faith. It is also the primary reason why so many secularists and religious moderates feel obligated to "respect" the hardened superstitions of their more devout neighbors.

In this explosive new book, Sam Harris tears down the wall between scientific facts and human values, arguing that most people are simply mistaken about the relationship between morality and the rest of human knowledge. Harris urges us to think about morality in terms of human and animal well-being, viewing the experiences of conscious creatures as peaks and valleys on a "moral landscape." Because there are definite facts to be known about where we fall on this landscape, Harris foresees a time when science will no longer limit itself to merely describing what people do in the name of "morality"; in principle, science should be able to tell us what we ought to do to live the best lives possible.

Bringing a fresh perspective to age-old questions of right and wrong and good and evil, Harris demonstrates that we already know enough about the human brain and its relationship to events in the world to say that there are right and wrong answers to the most pressing questions of human life. Because such answers exist, moral relativism is simply false—and comes at increasing cost to humanity. And the intrusions of religion into the sphere of human values can be finally repelled: for just as there is no such thing as Christian physics or Muslim algebra, there can be no Christian or Muslim morality.

Using his expertise in philosophy and neuroscience, along with his experience on the front lines of our "culture wars," Harris delivers a game-changing book about the future of science and about the real basis of human cooperation.

Sam Harris is the author of the bestselling books The End of Faith, Letter to a Christian Nation, The Moral Landscape, Free Will, and Lying. The End of Faith won the 2005 PEN Award for Nonfiction. His writing has been published in over fifteen languages. Dr. Harris is cofounder and CEO of Project Reason, a nonprofit foundation devoted to spreading scientific knowledge and secular values in society. He received a degree in philosophy from Stanford University and a PhD in neuroscience from UCLA. Please visit his website at SamHarris.org.

“Sam Harris breathes intellectual fire into an ancient debate. Reading this thrilling, audacious book, you feel the ground shifting beneath your feet. Reason has never had a more passionate advocate.”
—Ian McEwan

Beautifully written as they were (the elegance of his prose is a distilled blend of honesty and clarity) there was little in Sam Harris's previous books that couldn't have been written by any of his fellow 'horsemen' of the 'new atheism'. This book is different, though every bit as readable as the other two. I was one of those who had unthinkingly bought into the hectoring myth that science can say nothing about morals. To my surprise, The Moral Landscape has changed all that for me. It should change it for philosophers too. Philosophers of mind have already discovered that they can't duck the study of neuroscience, and the best of them have raised their game as a result. Sam Harris shows that the same should be true of moral philosophers, and it will turn their world exhilaratingly upside down. As for religion, and the preposterous idea that we need God to be good, nobody wields a sharper bayonet than Sam Harris.
--Richard Dawkins

“Reading Sam Harris is like drinking water from a cool stream on a hot day. He has the rare ability to frame arguments that are not only stimulating, they are downright nourishing, even if you don’t always agree with him! In this new book he argues from a philosophical and a neurobiological perspective that science can and should determine morality. His discussions will provoke secular liberals and religious conservatives alike, who jointly argue from different perspectives that there always will be an unbridgeable chasm between merely knowing what is and discerning what should be. As was the case with Harris’ previous books, readers are bound to come away with previously firm convictions about the world challenged, and a vital new awareness about the nature and value of science and reason in our lives.”
—Lawrence M. Krauss, Foundation Professor and Director of the ASU Origins Project at Arizona State University, author of The Physics of Star Trek, and, Quantum Man: Richard Feynman’s Life in Science

“A lively, provocative, and timely new look at one of the deepest problems in the world of ideas. Harris makes a powerful case for a morality that is based on human flourishing and thoroughly enmeshed with science and rationality. It is a tremendously appealing vision, and one that no thinking person can afford to ignore.”
--Steven Pinker, Harvard College Professor of Psychology, Harvard University, and author of How the Mind Works and The Blank Slate.