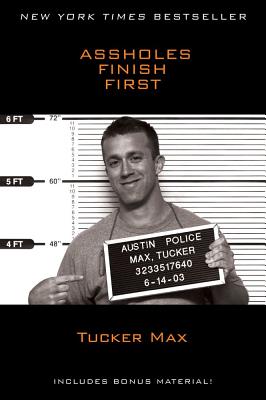 The best gift for the dudes and bros in your life: the fratire New York Times bestseller Assholes Finish First, featuring twenty-five new and exclusive stories by Tucker Max.

What do you do after you write a #1 bestselling book about your drunken, sexual misadventures that makes you rich and famous? Celebrate by getting more drunk and having insane amounts of sex, obviously. And pretty soon you’ve got another bestselling book on your hands.

Stuffed full of ridiculous stories of bad decisions, debauchery, and sexual recklessness, Assholes Finish First starts where I Hope They Serve Beer In Hell left off, then proceeds to “some next-level shit.”

You already know how women react to confidence, game, and vodka, but what happens when you add money and fame to the mix? You get answers to the hard questions you've never thought of asking:

• What’s it like to have sex with a midget? What about two midgets?
• What does it do to a man to watch a nineteen-year-old do wind sprints to sober up, so that she can have sex with you before her twin sister does?
• At what number of virgins does deflowering them stop being fun and start feeling like a job?
• When a girl you met three hours ago decides to tattoo your name on her body, what is the appropriate reaction?

The answers are inside, they are absurd and hilarious, and they are the product of one man's experiences:

His name is Tucker Max, and he is still an asshole.

Tucker Max received his BA with highest honors from the University of Chicago in 1998, and attended Duke Law School on an academic scholarship, where he graduated with a JD in 2001. His first book, I Hope They Serve Beer In Hell, is a #1 New York Times bestseller, has spent over 150 weeks on the New York Times bestseller list over five calendar years, and has sold over 1 million copies. He has also been credited with being the originator and leader of the literary genre, "fratire," and was nominated to Time magazine's 100 Most Influential List in 2009. He currently lives in Austin, Texas, and can be reached through his website, TuckerMax.com.