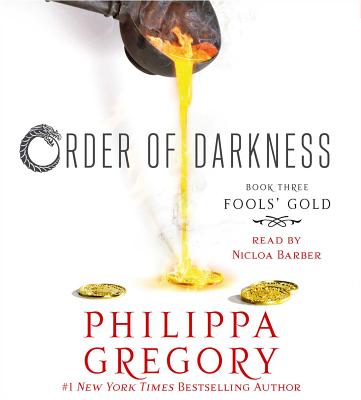 This is book number 3 in the Order of Darkness series.

All that glitters may well be gold in the third book in the Order of Darkness series from #1 New York Times bestselling author Philippa Gregory.

Tasked to expose a coin counterfeiting scheme, Luca and Isolde travel to Venice just in time for Carnival. Amid the masks, parties, and excitement, the romantic attraction between the two reaches a new intensity that neither can deny.

Their romance is interrupted by the arrival of the alchemist, who may be the con artist they’ve been looking for. But as Luca starts to investigate the original charge, the alchemist reveals his true goal—he plans to create the Philosopher’s Stone, a mystical substance said to be capable of turning base metals into gold and producing the elixir of life.

With pounds of undocumented gold coins and an assistant who claims to be decades older than she appears, all evidence points to the possibility that the alchemist has succeeded in his task. But as Luca and Isolde get closer to the truth, they discover that reality may be more sinister than they ever could have imagined.

Philippa Gregory is the author of many New York Times bestselling novels, including The Other Boleyn Girl, and is a recognized authority on women’s history. Many of her works have been adapted for the screen including The Other Boleyn Girl. She graduated from the University of Sussex and received a PhD from the University of Edinburgh, where she is a Regent. She holds honorary degrees from Teesside University and the University of Sussex. She is a fellow of the Universities of Sussex and Cardiff and was awarded the 2016 Harrogate Festival Award for Contribution to Historical Fiction. She is an honorary research fellow at Birkbeck, University of London. She was awarded a CBE title for services to literature and charity in 2022. She welcomes visitors to her website PhilippaGregory.com.