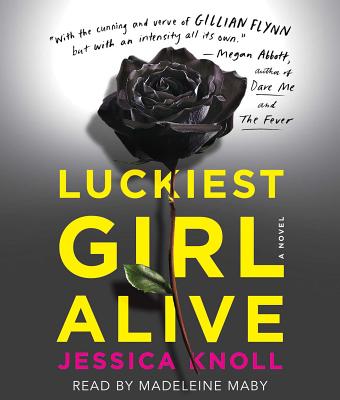 By Jessica Knoll, Madeleine Maby (Read by)
$39.99
Email or call for price.

Fans of Gone Girl and The Girl on the Train will thrill at “the perfect page-turner to start your summer” (People, Book of the Week): Luckiest Girl Alive—described by Reese Witherspoon as “one of those reads you just can’t put down!”

“Jessica Knoll introduces you to your new best frenemy, and you’re going to love it. . . .Destined to become one of the summer’s most gripping reads.”
—Bustle.com

“With the cunning and verve of Gillian Flynn but an intensity all its own, Luckiest Girl Alive is a debut you won’t want to miss.”
—Megan Abbott, author of Dare Me and The Fever

“Luckiest Girl Alive is Gone Girl meets Cosmo meets Sex and the City. . . . Knoll hits it out of the park.”
—Fort Worth Star-Telegram

Jessica Knoll is the New York Times bestselling author of Luckiest Girl Alive, which has been optioned for film by Lionsgate with Reese Witherspoon set to produce. She has been a senior editor at Cosmopolitan and the articles editor at Self. She grew up in the suburbs of Philadelphia and graduated from The Shipley School in Bryn Mawr, Pennsylvania, and from Hobart and William Smith Colleges in Geneva, New York. She lives in Los Angeles with her husband and her bulldog, Beatrice. The Favorite Sister is her second novel.
My Account • Sign In • Sign Out • Register
NEW & USED BOOKS
AUTHOR EVENTS • GIFTS
Tempe
6428 South McClintock Drive
480.730.0205
[Google Map]
Sunday-Friday 10am-8pm
Saturday 9am-8pm
Trade Counter 11am-6pm daily