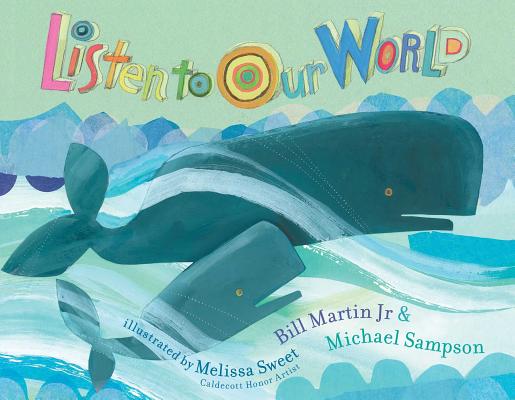 From beloved storytellers Bill Martin Jr. and Michael Sampson and with shimmering illustrations by Caldecott Honor­ artist Melissa Sweet comes a celebration of the animals all around us!

Big, small, black, brown—all kinds of animals make their home in our world. From the jungle to the mountains to your own backyard, listen and you just might hear the sounds they make!

Bill Martin, Jr. (1916–2004) has been called “America’s favorite children’s author.” He wrote more than 300 books for children, including the classic texts Brown Bear, Brown Bear, What Do You See?, illustrated by Eric Carle; and Chicka Chicka Boom Boom, illustrated by Lois Ehlert.

Michael Sampson is a New York Times bestselling author of twenty-two books for young children, including Chicka Chicka 1, 2, 3 and The Bill Martin Jr Big Book of Poetry. He and Bill Martin Jr wrote many popular books together, including Panda Bear, Panda Bear, What Do You See? and Baby Bear, Baby Bear, What Do You See? Michael Sampson lives in Flagstaff, Arizona.

Melissa Sweet has illustrated more than eighty children’s books, including the Caldecott Honor books The Right Word and A River of Words: The Story of William Carlos Williams both written by Jen Bryant. She also wrote and illustrated Tupelo Rides the Rails; Carmine: A Little More Red, which was a New York Times Best Illustrated Children’s Book; and Balloons Over Broadway, a picture book biography that was named a 2011 Publishers Weekly Best Nonfiction Picture Book. When she is not in her studio, Melissa can be found taking an art class, hiking with her dogs, or riding her bicycle. She lives with her family in Rockport, Maine.

Readers of all ages will be charmed by the warmth of Melissa Sweet’s illustrations in this celebration of our world. The illustrations pulsate with greens and blues, laid out in mostly horizontal double-page spreads, though they occasionally require the book to be flipped sideways, the spreads shooting up vertically (appropriate for the large cactus surrounded by gila monsters). Giant pandas, too, climb a vertical spread, before the long, snapping crocodile turns the book horizontal once again. Martin and Sampson’s spare text emphasizes the sounds each of these lively creatures make: the lion ROARS, of course, but the eagle weee-aaas! Each sound is repeated several times, allowing plenty of opportunity for mimicry, and the environment of each creature is also acknowledged. The book opens with Mommy's wake-up kisses ("Good morning, little one. Can you hear the sounds of our world?") and ultimately comes
full circle, ending back at home with good-night kisses and the hope for sweet dreams. End notes include the habitat for each creature mentioned and a short, interesting fact. There is so much of interest here that lucky listeners will want to experience it again and again before sleep. Pair with Mary Logue's Sleep Like a Tiger (2012) for another bedtime book connected to the animal world.
— Booklist *STARRED*

Martin, who gave theworld the beloved Brown Bear, Brown Bear, What Do You See? and Chicka ChickaBoom Boom, died in 2004, but another of his works is brought to life by hisfrequent collaborator, Sampson. It's all further enlivened by Sweet's rosy,greeny-golden illustrations, which bring to very immediate life the animals oneach page. A panoply of mommies of various ethnicities offer wake-up kisses andask, "Can you hear the sounds of our world?" It is a big world: Gilamonsters in the desert hiss; monkeys in the jungle cry "Eeee!"; lionson the plain roar (although they are baby lions, and their roars are clearlysmall if enthusiastic; the cubs themselves are levitating with excitement).Some of the sounds supplied do not give a very clear indication of what theanimal sounds like—"Honk!" for elephants or "Wahhh!" forwhales, for instance—but careful and alert adults can compensate for this whilereading aloud. Each animal illustrated is listed at the end, with its habitat,location, and a fact or two. For the penguin, it is carefully pointed out thatit is the male penguin who keeps the egg warm and the female who goes forth andhunts for food. A delightful new visit with an old friend. (Picture book. 4-8)
— Kirkus Reviews

Sampsonand the late Martin (Chicka Chicka 1, 2, 3) offer a nominal introductionto animals and their homes, as well as a simple call to action: listen. “In the morning, Mommy gives us wake-up kisses and says, ‘Good morning, little one. Can you hear the sounds of our world?’ ” In the windows of many houses, mothers of different colors kiss their children while the words Listen! Listen! Listen!appear in the sky above. A page turn shows a parrot and three nestlings (“Around a giant kapok tree, bright parrots flit and fly. The rain forest is their world”). In vertically and horizontally oriented spreads, readers see families of Gila monsters, bald eagles, kangaroos, elephants, whales, and more, all shown where they live, all making noises to listen for. At last, the tale comes full circle as a mother bids her child good night. Caldecott Honor artist Sweet’s (The Right Word) artwork has a primitive, folk-art feel in line with her earlier books, with dreamy, subdued shades of green and blue throughout. Ages 4–8.
— Publishers Weekly

PreS-Gr 1–On the title page of this simple and thoroughly inviting picture book, the universe appears vast and quiet, but zoom down to Earth and there are a great many habitats and inhabitants that make up our world. “Listen! Listen! Listen!” mommies say to their little ones, as each page turn reveals a colorful spread depicting a specific ecosystem, related animal family, and appropriate animal sound.“Around a giant kapok tree, bright parrots flit and fly. The rain forest is their world. Squawk! Squawk! Squawk!” At first glance, Martin and Sampson’s repetitive phrasing results in a text that seems almost mundane, lacking the bounce that makes Martin’s Polar Bear, Polar Bear, What Do You Hear? such a pleasure to read aloud. Yet this book is so visually rich that children will quickly be searching the pages for words to shout. Some sounds are familiar (“Hiss!” “Roar!”), while others offer readers something new(“Weee-aaa!”), but all are engaging and fun to repeat. Once again, Sweet has masterfully combined watercolor, handmade papers, pencil, and paint to create horizontally and vertically oriented pages that are a feast of color, shape,expression, movement, and, of course, sound. Further facts about the 11 habitats and animals are provided at the end. VERDICT A delightful introduction to the variety of environments that make up the world we live in. Highly recommended.
— School Library Journal *STARRED REVIEW*

When the late Bill Martin Jr.’s name is attached to a picture book, you want to take notice. The author of more than 300 children’s books, he’s the man behind the beloved Brown Bear, Brown Bear, What Do You See?, as well as Chicka Chicka Boom Boom, both staples for the preschool set. And his newest book, published posthumously and in partnership with New York Times bestselling author Michael Sampson, the dean of the School of Education at St. John’s University, is a charmer.

This is a book that looks at young creatures, including humans, all over the world. They all wake to a new day with parents by their sides. The book explores, in very basic ways, their sounds and habitats. It all kicks off on the first full spread with the sunny, loving image from Caldecott Honoree Melissa Sweet of (human) mother-and-child duos. “Good morning, little one,” the mothers ask. “Can you hear the sounds of our world?” The following spreads feature various animals and the sounds they make—and with two simple sentences on each page, the last one noting which habitat constitutes “their world.”

With such spare text, Sweet has lots of room to show off her talents with watercolors and mixed media. Her palette is dominated by warm earth tones. (The bright red on the spread featuring the eagles steals the show.) Even if groups of animals are showcased, she always lets the parent and baby take focus on each spread. Several times, she switches from a horizontal orientation to a vertical one, such as with those eagles, who are “high above the mountain peaks”; the panda bears, whose world consists of the bamboo forest; and gila monsters, surrounded by the tall cacti of the desert.

The book closes with further facts about each animal, noting where in particular Sweet sets her families. These additional notes may spark further reading for the very young readers at which this book is aimed.