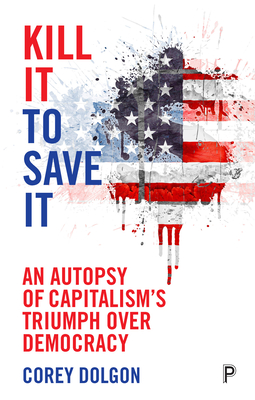 For decades now, American voters have been convinced to support public policies that only benefit those in power. But how do the powerful extract consent from citizens whose own self-interest and collective well-being are constantly denied? And why do so many Americans seem to have given up on quality public education, on safe food and safe streets, on living wages—even on democracy itself? Kill It to Save It lays bare the hypocrisy of contemporary US political discourse, documenting the historical and theoretical trajectory of capitalism’s triumph over democracy.

Tackling the interconnected issues of globalization, neoliberalism, and declining public institutions, Corey Dolgon argues that American citizens now accept reform policies that destroy the public sector (seemingly in the public interest) and a political culture that embraces what Stephen Colbert calls “truthiness”—a willingness to agree to arguments that feel right “in the gut” regardless of fancy science or messy facts. In a narrative that stretches from the post-Vietnam War era to the present parade of political reality TV and debates over Black Lives Matter, Dolgon dismantles US common-sense cultural discourse. His original, alternative account reveals that this ongoing crisis in US policy will not cease until a critical mass of American citizens recognize what has been lost, and in whose interest.

Corey Dolgon is professor of sociology and director of community-based learning at Stonehill College in Easton, Massachusetts. He is the author of three other books, including the award-winning The End of the Hamptons: Scenes from the Class Struggle in America’s Paradise.

"Dolgon’s astute look at the conservative turn in US politics . . . offers a fascinating look at the phenomenon that made Donald J. Trump the preferred choice of many voters in the United States. . . . The long-term fallout of this turn has many of us thinking far less critically than we should be—exactly as intended—and Dolgon takes pains to lay out how and why we’ve learned to tolerate the intolerable. . . . Dolgon’s analysis will be useful in efforts to oppose privatization and reassert the idea that government’s main function is serving the people, not propping up business. What’s more, Kill It to Save It, like Naomi Klein’s The Shock Doctrine, offers a clear and accessible look at how policy is crafted, marketed, and ultimately sold or rejected."
— Eleanor J. Bader

“This book is a trenchant critique of a popular notion in today’s politics and policy making: kill it to save it, the notion that often ‘the only way to save public institutions is to privatize them.’ . . . Dolgon paints a sad picture of such vaunted American public institutions as social security, public education, health care, food, voting rights, and campaign finance, among others, and argues that the kill-it-to-save-it ideology is to blame. . . . Kill It to Save It is engagingly written and persuades the reader of the need to save our public institutions by investing in them, not by killing them. Recommended.”
— J. Bhattacharya, Iowa State University

“To understand the popularity of Italian Fascism in the ’30s, we needed Antonio Gramsci. To understand the popular malaise among the US middle class in the ’50s, we needed C. Wright Mills. And to understand the popularity of Donald J. Trump and the prevailing logic that turns billionaires into job creators, unions into job destroyers, and climate scientists into godless Communists, we need Corey Dolgon. Clear-eyed and perceptive, Dolgon reveals that the new ‘common sense’ upholding privatization, deregulation, wealth concentration, and the erosion of democracy and civil liberties as the only path to prosperity was not the handiwork of Fox News and wily neocons but the outcome of a deeper ideological and cultural shift. Kill It to Save It is mandatory reading if we are to replace the neoliberal ‘common sense’ with the radical possibilities of ‘good sense.’”
— Robin D. G. Kelley, author of "Freedom Dreams: The Black Radical Imagination"

“I always love a good whodunit and like a good Agatha Christie mystery, Dolgon's book peels back the layers of neoliberalism to expose not only the crimes and who committed them, but the weapons they used and the fake alibis they told. If you want to know why reality-TV politics and budget austerity killed our democracy and economy, read this book.”
— Jim Hightower, author, radio commentator, and editor of "The Hightower Lowdown"

“A provocative, thoughtful, and engaging book, a must-read for people trying to find out 'what’s that sound and what is goin’ down.' Policy makers looking out for the interests of their corporate benefactors are selling our institutions to the highest bidders and idly looking away as the lives of the most vulnerable among us are pushed to the edge of survival.”
— Rogelio Sáenz, University of Texas at San Antonio

"The left is in disbelief by Trump’s election. Thankfully, Dolgon’s book had anticipated such a development. Dolgon shows how capitalist hegemony and hyper-individualism reshaped America’s national identity, making us ever more susceptible to embracing a reality-TV star who promises to 'Make America Great Again' despite promoting the worst elements of the country’s historical DNA. Required reading for those hoping not only to resist Trumpism, but envision a new left for the twenty-first century."
— Eduardo Bonilla-Silva, author of "Racism Without Racists: Color-Blind Racism and the Persistence of Racial Inequality in America"

"Longtime activist and provocative thinker Corey Dolgon has written a compelling and timely new book, Kill It to Save It, which explores neoliberalism, popular culture, the decline of public institutions, and the serious challenges activists and organizers face as we imagine a world beyond the crumbling edifices of US capitalism."
— Barbara Ransby, University of Illinois at Chicago

“There is no better time in US history to examine how commonsense ideas have made American life and freedoms worse, not better—ours is a crisis many years in the making. This is a must-read book if, like me, you are trying to make sense of a society that seems to have gone bonkers!”
— David G. Embrick, University of Connecticut