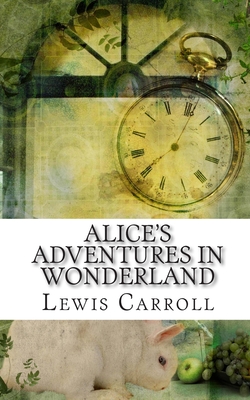 Alice's Adventures in Wonderland (commonly shortened to Alice in Wonderland) is an 1865 novel written by English author Charles Lutwidge Dodgson under the pseudonym Lewis Carroll. It tells the story of a girl named Alice who falls down a rabbit hole into a fantasy world populated by peculiar and anthropomorphic creatures.

The tale is filled with allusions to Dodgson's friends. The tale plays with logic in ways that have given the story lasting popularity with adults as well as children. It is considered to be one of the most characteristic examples of the "literary nonsense" genre, and its narrative course and structure have been enormously influential, especially in the fantasy genre.

Note that this is the Academic (NON-ILLUSTRATED) Edition of Carroll's classic work. Most editions are filled with pictures and this is intended for schools and those who wish to study the language structure of the original text.

Lewis Carroll (born January 27, 1832 and died January 14, 1898), whose real name was Charles Lutwidge Dodgson, was an English author, mathematician, logician, Anglican deacon and a photographer. His most famous writings are Alice's Adventures in Wonderland and its sequel Through the Looking-Glass, as well as the poems The Hunting of the Snark and Jabberwocky.
My Account • Sign In • Sign Out • Register
NEW & USED BOOKS
AUTHOR EVENTS • GIFTS
Tempe
6428 South McClintock Drive
480.730.0205
[Google Map]
Sunday-Friday 10am-8pm
Saturday 9am-8pm
Trade Counter 11am-6pm daily