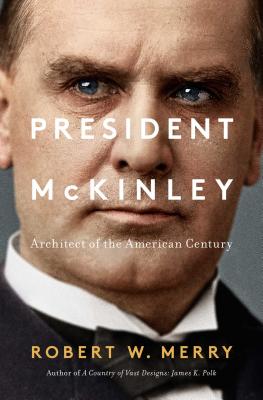 By Robert W. Merry
Email or call for price
Hard to Find

“A valuable education on where America has been and, possibly, where it is going.”—National Review

In this great American story, acclaimed historian Robert Merry resurrects the presidential reputation of William McKinley, which loses out to the brilliant and flamboyant Theodore Roosevelt who succeeded him after his assassination. He portrays McKinley as a chief executive of consequence whose low place in the presidential rankings does not reflect his enduring accomplishments and the stamp he put on the country’s future role in the world.

Republican President William McKinley in his two terms as president (1897 – 1901) transformed America. He established the US as an imperial power. Although he does not register large in either public memory or in historians’ rankings, in this revealing account, Robert W. Merry unfolds the mystery of how this bland man managed so much powerful change.

McKinley settled decades of monetary controversy by taking the country to a strict gold standard; in the Spanish-American war he kicked Spain out of the Caribbean and liberated Cuba from Spain; in the Pacific he acquired Hawaii and the Philippines through war and diplomacy; he developed the doctrine of “fair trade”; forced the “Open Door” to China; forged our “special relationship” with Great Britain. In short, he established the non-colonial imperialism that took America into global preeminence. He expanded executive power and managed public opinion through his quiet manipulation of the press. McKinley paved the way for the bold and flamboyant leadership of his famous successor, Teddy Roosevelt, who built on his accomplishments (and got credit for them).

Merry writes movingly about McKinley’s admirable personal life, from his simple Midwestern upbringing to his Civil War heroism to his brave comportment just moments before his death by assassination (it was only six months into his second term when he was shot). Lively, definitive, and eye-opening, President McKinley resurrects this overlooked president and places him squarely on the list of one of the most important.

Robert Merry is the editor of The National Interest. He has been a Washington correspondent for The Wall Street Journal and the executive editor of the Congressional Quarterly. He has written for The New York Times, The Wall Street Journal, The Weekly Standard, The National Review, The American Spectator, and The National Interest. He has appeared on Meet the Press, Face the Nation, Newsmakers, and many other programs. The author of McKinley, he lives in McLean, Virginia.

“As this splendid revisionist narrative makes plain, [McKinley’s] legacy includes three rules to guide his successors: Transformative leadership wears many faces. The presidency is no job for a political amateur. Character counts, sometimes even more than charisma.”
— The Wall Street Journal

“In his measured, insightful biography, Robert W. Merry seeks to set the record straight. . . . Merry is methodical and deliberate . . . Clear and thoroughgoing, Merry’s book is a deft character study of a president. It is also a brief for the slow-and-steady school of leadership, a subtle reminder that show boating moralizers can be balanced by grounded and wise souls.”
— The New York Times Book Review

“One of the country’s most under-appreciated and unknown presidents finally gets his due in this lively, deeply researched and richly informed biography of the 25th occupant of the nation’s highest office, William McKinley. Merry has written a gem of a book that will gratify any political junkie or fan of presidential history.”
— Karl Rove, author of The Triumph of McKinley

“Merry reexamines McKinley and his legacy and puts a fresh twist on the old tale, one in which McKinley belongs far more to the modern American presidency than is generally known. . . . Merry offers a window on the past that also holds a reflection on the present. In it, readers will receive a valuable education on where America has been and, possibly, where it is going.”
— National Review

“A superb study of this neglected American statesman . . . Merry unites impressive archival research with astute judgments to offer a riveting portrait of McKinley. He covers a vast amount of territory, focusing on the link between McKinley’s rise and the formation of the modern Republican party.”
— The National Interest

“A fresh biography of the short-lived presidency of William McKinley (1843-1901), "an unlikely figure to be presiding over the transformation of America.". . .  Merry makes a persuasive case that he was not just an amiable Ohio governor, protégé of Cleveland businessman Mark Hanna, but a canny, ambitious statesman.”
— Kirkus Reviews

"Critics or admirers of McKinley’s presidency will agree it was a momentous one and that Merry’s is a fair-minded profile of its central actor."
— Booklist

“If you want to understand the United States’ standing in the world at the end of the nineteenth century, and the powerful nation that emerged from it, read this book. Robert Merry’s fast-paced and revealing biography makes it strikingly clear that McKinley’s legacy is as rich and fascinating as that of his irrepressible successor in the White House, Theodore Roosevelt.”
— Candice Millard, New York Times Bestselling author of Destiny of the Republic

“Engrossing . . . a work of revision, a corrective, and on these terms, Merry is successful. This comprehensive treatment, focused most intensively on McKinley’s years in the White House, convincingly shows Hofstadter’s verdict to be false and in so doing, fills a gap in the literature on this undeservedly unheralded president.”
— City Journal

"A deserving reappraisal of a middling leader that will intrigue presidential history fans."