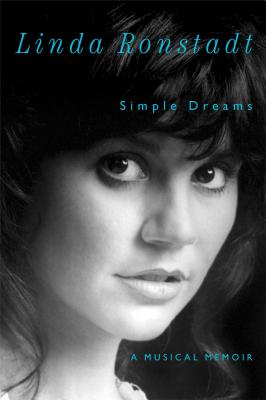 By Linda Ronstadt
Email or call for price
Hard to Find

In this memoir, iconic singer Linda Ronstadt weaves together a captivating story of her origins in Tucson, Arizona, and her rise to stardom in the Southern California music scene of the 1960s and ’70s.

Tracing the timeline of her remarkable life, Linda Ronstadt, whose forty-five year career has encompassed a wide array of musical styles, weaves together a captivating story of her origins in Tucson, Arizona, and her rise to stardom in the Southern California music scene of the 1960s and ’70s.

Linda Ronstadt was born into a musical family, and her childhood was filled with everything from Gilbert and Sullivan to Mexican folk music to jazz and opera. Her artistic curiosity blossomed early, and she and her siblings began performing their own music for anyone who would listen. Now, in this beautifully crafted memoir, Ronstadt tells the story of her wide-ranging and utterly unique musical journey.

Ronstadt arrived in Los Angeles just as the folkrock movement was beginning to bloom, setting the stage for the development of country-rock. As part of the coterie of like-minded artists who played at the famed Troubadour club in West Hollywood, she helped define the musical style that dominated American music in the 1970s. One of her early backup bands went on to become the Eagles, and Linda went on to become the most successful female artist of the decade.

In Simple Dreams, Ronstadt reveals the eclectic and fascinating journey that led to her long-lasting success, including stories behind many of her beloved songs. And she describes it all in a voice as beautiful as the one that sang “Heart Like a Wheel”—longing, graceful, and authentic.

Linda Ronstadt has received twelve Grammy Awards, two Academy of Country Music Awards, and one Emmy Award, as well as several Tony and Golden Globe nominations. She lives in San Francisco with her family.

“True to her subtitle, Ms. Ronstadt delivers a life story stitched to the sails of her eclectic musical voyaging. . . . She has found another way to tell a story: through this winning and informative book, in which her intelligence, passion, humor and commitment shine forth from every page.”
— Tom Nolan

“For anyone fascinated by the cross-pollination of musical talent in Los Angeles' buzzing pre-corporate rock scene, Ronstadt's front-row seat offers a prime view. . . . While this bird can no longer sing, on the page she can still fly.”

"Ronstadt revisits, with a mixture of fine-grained insight and personal modesty, one of the most remarkable and wide-ranging singing careers in the last century of American popular music."

“A well-written glimpse into musical history as it was being made by Ronstadt and her peers.”
My Account • Sign In • Sign Out • Register
NEW & USED BOOKS
AUTHOR EVENTS • GIFTS
Tempe
6428 South McClintock Drive
480.730.0205
[Google Map]
10am-7pm daily
Trade Counter 11am-6pm daily