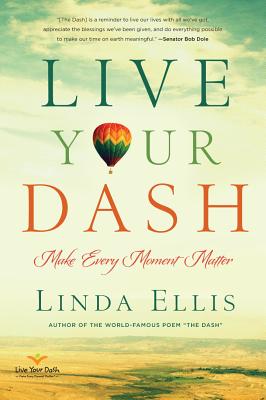 Includes the original poem "The Dash."
I read of a man who stood to speak
At the funeral of a friend
He referred to the dates on her tombstone
From the beginning to the end
He noted that first came the date of her birth
And spoke the following date with tears,
But he said what mattered most of all
Was the dash between those years. In 1996, an announcer read Linda Elliss poem "The Dash" aloud on a syndicated radio program--and, to her surprise, it became an instant, meteoric success. Calls came in from people around the country eager to tell Linda how her words had touched their hearts. That was the beginning of an enduring phenomenon.
Live Your Dash captures and expands upon the theme of the original poem: Its not your birth or death that matters most, but how you spend each passing year. Linda shares her message of joy, hope, and positive energy through uplifting stories, essays, and poetry, along with tales of people who have been "touched by the dash," including Bob Dole, legendary football coach Lou Holtz, and American Idol winner David Cook. An inspiring look at life based on the fantastically successful poem.

Linda Ellis started writing poems as a child, and her work has been featured in bestselling books and magazines such as Family Circle, US News and World Report, and other major publications. Her poems have also appeared on local television and hundreds of radio programs, including Radio Delilah. She lives in GA.