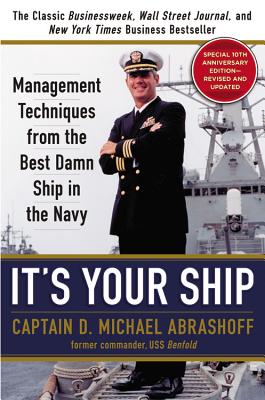 When Captain Abrashoff took over as commander of USS Benfold, it was like a business that had all the latest technology but only some of the productivity. Knowing that responsibility for improving performance rested with him, he realized he had to improve his own leadership skills before he could improve his ship. Within months, he created a crew of confident and inspired problem-solvers eager to take the initiative and responsibility for their actions. The slogan on board became "It's your ship," and Benfold was soon recognized far and wide as a model of naval efficiency. How did Abrashoff do it? Against the backdrop of today's United States Navy, Abrashoff shares his secrets of successful management including:
From achieving amazing cost savings to winning the highest gunnery score in the Pacific Fleet, Captain Abrashoff's extraordinary campaign sent shock waves through the U.S. Navy. It can help you change the course of your ship, no matter where your business battles are fought.

Captain D. Michael Abrashoff is a graduate of the U.S. Naval Academy in Annapolis, MD, and was a military assistant to the former secretary of defense, the Honorable Dr. William J. Perry. Abrashoff left the Navy in 2001 and became the founder and CEO of Grassroots Leadership, Inc., in Boston. You can visit his website at www.grassrootsleadership.com.