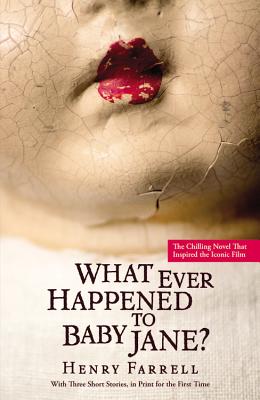 I saw Whatever Happened to Baby Jane? years ago and I absolutely loved it: creepy, campy and endlessly quotable--it's everything I love in a movie! So I was excited to see that the story that inspired the movie was coming back into print, along with several previously unpublished stories. Farrell's writing is sharp--more literary than I expected and completely enjoyable. I would call this a guilty pleasure, but I feel no guilt--it's the perfect book to enjoy with a box of chocolates and a growing sense of unease!

As seen on the FX series Feud: Bette and Joan, which chronicles the rivalry between the Hollywood stars during their filming of Whatever Happened to Baby Jane?

The neighbors all whisper about the two sisters who live on the hill: It's Blanche Hudson who lives in that house, you know. The Blanche Hudson, who starred in big Hollywood films all those years ago. Such a shame her career ended so early, all because of that accident. They say it was her sister, Jane, who did it--that she crashed the car because she was drunk. They say that's why she looks after Blanche now, because of the guilt. That's what they say, at least.

Nobody remembers that Jane was once a star herself. A fixture of early vaudeville, Baby Jane Hudson performed her song and dance routines for adoring crowds until a move to Hollywood thrust her sister into the spotlight. Even now, years later, Jane dreams of reviving her act. But as the lines begin to blur between fantasy and reality, past resentments become dangerous--and the sisters' long-kept secrets threaten to destroy them.

Now with three short stories available for the first time in print, including What Ever Happened to Cousin Charlotte, the basis for the film Hush...Hush, Sweet Charlotte.

Henry Farrell was a novelist and screenwriter. His most well-known work was the acclaimed gothic horror novel What Ever Happened to Baby Jane?