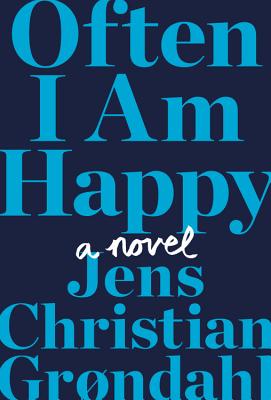 There is no room for error when it comes to novels as slim as this one. Fortunately, Jens Christian Grøndahl is impeccable! Often I Am Happy opens after the death of Ellinor's husband Georg: she feels a mixture of emotions and a need to confide in someone. That someone is her long-deceased friend, Georg's first wife Anna. Ellinor goes back and forth in time, telling Anna about her life now, her relationships with the sons Anna never saw to adulthood, her new home. But she keeps going back to their tangled past and her own murky background. I enjoyed this beautiful, sorrowful, occasionally funny story immensely--this is a book to read and re-read in quick succession!

This elegant and nuanced literary gem explores the intricacies of friendship, secrets, and two marriages, for fans of The Dinner and Dept. of Speculation.

Ellinor is seventy. Her husband Georg has just passed away, and she is struck with the need to confide in someone. She addresses Anna, her long-dead best friend, who was also Georg's first wife. Fully aware of the absurdity of speaking to someone who cannot hear her, Ellinor nevertheless finds it meaningful to divulge long-held secrets and burdens of her past: her mother's heartbreaking pride; Ellinor's courtship with her first husband; their seemingly charmed friendship with Anna and Georg; the disastrous ski trip that shattered the two couples' lives. Wry and mellow yet infused with subdued emotion, this philosophical, lyrical novel moves in parallel narrative threads while questioning the assumptions we cherish concerning identity and love.

Jens Christian Grøndahl was born in 1959. His work has been translated into more than 25 languages, and he has received numerous literary prizes in Denmark and abroad. In France, he was made Chevalier dans l'ordre des Arts et des Lettres for his contribution to French culture. His novels Silence in October, Lucca, An Altered Light, and Virginia have also been translated into English. He lives in Copenhagen with his wife and two daughters.

"A compassionate and often edifying commentary on the elasticity of love, the strength it takes to move forward after a death, and the power of forgiveness."—Publishers Weekly (Starred Review)

"The pleasures of this short novel are those of watching a foreign film that transports you to an unfamiliar emotional terrain."—Metro Toronto