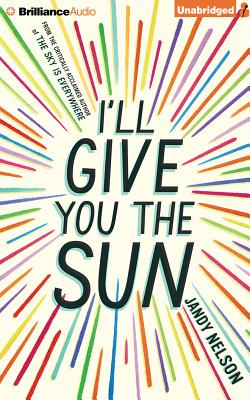 By Jandy Nelson, Julia Whelan (Read by), Jesse Bernstein (Read by)
Email or call for price
Out of Print

Jandy Nelson is arguably one of the better kept secrets of the young adult world and her second novel is an exceptional piece of work. The prose alone will keep you hooked from the first page. I wanted to finish it in a day, but gave myself time to read this novel over several days, just so I could savor the beautiful writing. Told from the alternating perspectives of twins Noah and Jude, each sibling tells their respective side of both their falling out and their family's disintegration from different time periods (Noah's viewpoint takes place in the past, Jude's the present), when eventually the two stories connect. This novel will break your heart and put it back together in a way you didn't expect. I'll Give You the Sun is a wonderful novel that is easily one of my favorite books of 2014.

Jude and her brother, Noah, are incredibly close twins. At thirteen, isolated Noah draws constantly and is falling in love with the charismatic boy next door, while daredevil Jude surfs and cliff-dives and wears red-red lipstick and does the talking for both of them. But three years later, Jude and Noah are barely speaking. Something has happened to wreck the twins in different and divisive ways...until Jude meets a cocky, broken, beautiful boy, as well as an unpredictable new mentor. The early years are Noah's story to tell. The later years are Jude's. What the twins don't realize is that they each have only half the story, and if they could just find their way back to one another, they'd have a chance to remake their world.

This radiant, fully alive novel from the critically acclaimed author of The Sky Is Everywhere will leave you breathless and teary and laughing--often all at once.