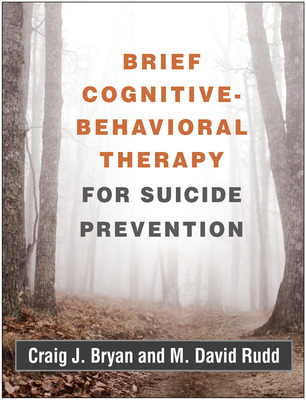 An innovative treatment approach with a strong empirical evidence base, brief cognitive-behavioral therapy for suicide prevention (BCBT) is presented in step-by-step detail in this authoritative manual. Leading treatment developers show how to establish a strong collaborative relationship with a suicidal patient, assess risk, and immediately work to establish safety. Proven interventions are described for building emotion regulation and crisis management skills and dismantling the patient's suicidal belief system. The book includes case examples, sample dialogues, and 17 reproducible handouts, forms, scripts, and other clinical tools. The large-size format facilitates photocopying; purchasers also get access to a webpage where they can download and print the reproducible materials.

Craig J. Bryan, PsyD, ABPP, is Executive Director of the National Center for Veterans Studies and Associate Professor in the Department of Psychology and the Department of Psychiatry at the University of Utah. He is an associate editor of the journal Suicide and Life-Threatening Behavior and previously served on the board of directors of the American Association of Suicidology. Dr. Bryan has received honors including the Charles S. Gersoni Military Psychology Award from Division 19 (Society for Military Psychology) and the Peter J. N. Linnerooth National Service Award from Division 18 (Psychologists in Public Service) of the American Psychological Association, as well as the Citizen Scientist Award and the Edwin S. Shneidman Award from the American Association of Suicidology. He is a University of Utah Presidential Scholar and Beacon of Excellence recipient. From 2005 to 2009, he served on active duty in the U.S. Air Force as a clinical psychologist, including a deployment to Iraq in 2009. Dr. Bryan’s primary research interests include suicide prevention and posttraumatic stress disorder. He has published over 150 scientific articles and several books, most of which focus on suicide prevention, trauma, and military mental health.

M. David Rudd, PhD, ABPP, is President of the University of Memphis, where he is also Distinguished University Professor of Psychology. He is Co-Founder and Scientific Director of the National Center for Veterans Studies at the University of Utah. Dr. Rudd is a Fellow of the American Psychological Association, the International Academy of Suicide Research, and the Academy of Cognitive and Behavioral Therapies, and has been elected a Distinguished Practitioner and Scholar of the National Academies of Practice in Psychology. He previously served as chair of the Texas State Board of Examiners of Psychologists, president of the Texas Psychological Association, president of the American Association of Suicidology, and a member of the American Psychological Association’s Council of Representatives. Dr. Rudd’s research focuses on the treatment of suicidal patients. He has published over 200 scientific articles and numerous books on the clinical care of suicidal individuals, and is considered an international leader in suicide prevention.

"There are very few treatments specifically designed to reduce suicide risk. From leading figures in the field of suicide prevention, this is a timely, extremely useful book. Bryan and Rudd's evidence-based approach is accessible to any clinician trained in general principles of CBT. This book should be on the shelf of any CBT practitioner who sees patients with suicide ideation or attempts."--E. David Klonsky, PhD, Department of Psychology, University of British Columbia, Canada

"Rather than focusing on some other diagnosis such as depression, Bryan and Rudd’s functional model of suicide prevention focuses on the suicidal behavior itself, with simple-to-apply, short-term CBT skills. This manual represents the most recent and effective effort in the evolution of treatments to reduce suicidal risk, and should be taught to and used by all clinicians for this most serious and increasingly frequent problem. This is a book that every therapist should have.”--Patricia A. Resick, PhD, ABPP, Department of Psychiatry and Behavioral Sciences, Duke University Medical School

"Bryan and Rudd have written an exceptionally detailed book that provides a step-by-step guide for the care of individuals at risk for suicide. Why should you learn BCBT? Because you will become equipped with specific CBT strategies that will make you not only more confident as a clinician, but also more effective in helping your suicidal patients regain their desire to live and thrive."--Marjan G. Holloway, PhD, faculty member, Beck Institute for Cognitive Behavior Therapy

"This is an excellent clinician guide for implementing brief cognitive-behavioral therapy for suicide prevention. The rationale is solid and accompanied by salient and user-friendly materials. Having this structured approach to an intense situation can help increase clinician confidence and patient outcomes. *****!”
— Doody's Review Service