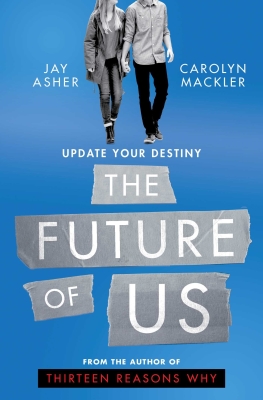 The Future of Us took me to the "past of me" -  back to high school and my introduction into the World Wide Web when I was 18. The Future of Us is set in 1996, when 17 year old Emma launches AOL for the first time. Only instead of "You've Got Mail" she is asked to login to a blue and white screen with a foriegn word attached, "Facebook". Suddenly she sees herself in her early 30's, living a life she isn't sure she wants. What would you do, when suddenly faced with the possiblity of changing your future?  Would you do it? Remember to think about the ripple effect your actions of today have over the years to come. It's not as easy as it sounds.

“The product of a dream collaboration between two very successful authors, this is the story of two teenagers, Josh and Emma, in 1996. Emma gets a computer as a gift, and Josh's mother sends him over to Emma's house with a free AOL disc. Once the disc is loaded and boots up, it shows Emma her Facebook page -- from 2011! Emma lets Josh in on the secret -- it turns out he has a page in 2011 too -- and the weirdness multiplies. Every time either of them makes a decision based on something they learn on Facebook, it changes their future. This fascinating book about the price of decisions and their consequences points out that what you do now can affect you forever. A fabulous read!”
— Jackie Blem, Tattered Cover Book Store, Denver, CO