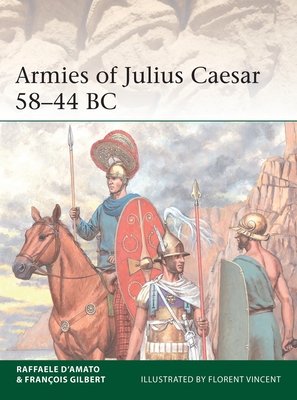 This book draws upon the latest research to explain and illustrate the Roman and allied troops of the consular armies led by Julius Caesar in his Gallic and civil wars.

Caius Julius Caesar remains the most famous Roman general of all time. Although he never bore the title, historians since Suetonius have judged him to be, in practice, the very first 'emperor' – after all, no other name in history has been synonymous with a title of imperial rule. Caesar was a towering personality who, for better or worse, changed the history of Rome forever. His unscrupulous ambition was matched only by his genius as a commander and his conquest of Gaul brought Rome its first great territorial expansion outside the Mediterranean world. His charismatic leadership bounded his soldiers to him not only for expeditions 'beyond the edge of the world' – to Britain – but in the subsequent civil war that raised him to ultimate power. What is seldom appreciated, however is that the army he led was as varied and cosmopolitan as those of later centuries, and it is only recently that a wider study of a whole range of evidence has allowed a more precise picture of it to emerge. Drawing on a wide-range of new research, the authors examine the armies of Julius Caesar in detail, creating a detailed picture of how they lived and fought.

Raffaele D'Amato, PhD, is the author of some 40 books and numerous articles on the military of Ancient Greece, the Roman Empire including Byzantium, and medieval Europe. He has taught at the University of Ferrara, and for two years as a visiting professor at Fatih University, Istanbul. He currently lives in England, working as an archaeological consultant and lawyer for Timeline Auctions Ltd of Harwich, and also as an external researcher for the Laboratory of the Danubian Provinces at the University of Ferrara.

François Gilbert is an associate researcher at the French National Centre for Scientific Research (CNRS), studying Roman militaria, and was a member of the Scientific Council of the Alesia Mission, which built the museum on the ancient site of Caesar's battle and studies the proconsul's army during the Gallic Wars. He was a founder-member of one of the first French re-enactment groups (Pax Augusta), studying, reconstructing and experimenting with equipment and fighting techniques. He is also the author of numerous books and articles on the Roman army and on gladiators.

Florent Vincent was born in 1973, and studied Applied Arts, History of Art and Archaeology. An illustrator specializing in historical and military subjects, he works with many French and foreign publishers and museums including the Museum of National Antiquities of St-Germain-en-Laye, the Museum of the Army of Paris and the Archaeological Museum of Frankfurt. He is also the co-author of two books on the Gallic Wars.