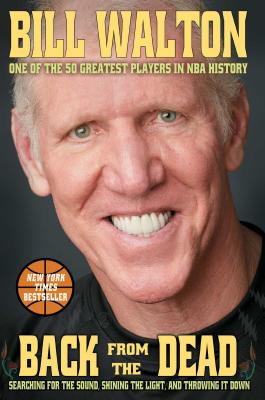 By Bill Walton
Email or call for price
Hard to Find

This inspiring memoir from sports and cultural icon Bill Walton recounts his devastating injuries and amazing recoveries, set in the context of his UCLA triumphs under John Wooden, his storied NBA career, and his affinity for music and the Grateful Dead.

In February 2008, Bill Walton suffered a catastrophic spinal collapse—the culmination of a lifetime of injuries—that left him unable to move. He spent three years on the floor of his house, eating his meals there and crawling to the bathroom, where he could barely hoist himself up onto the toilet. The excruciating pain and slow recovery tested Walton to the fullest. But with extraordinary patience, fortitude, determination, and sacrifice—and pioneering surgery—he recovered, and now shares his life story in this remarkable and unique memoir.

Walton grew up in San Diego in the 1950s and 1960s and was deeply influenced by the political and cultural upheavals of that period. Although he strongly identified with the cool people, particularly in music and politics, his greatest role model outside his family was super-straight UCLA basketball coach John Wooden, a thoughtful, rigorous mentor who seemed immune to the turmoil of the times. Although there was always tension and conflict between them, the two men would speak nearly every day for forty-three years, until Wooden’s death at age ninety-nine.

Despite a lifelong stuttering affliction, Walton chose a career in broadcasting after his playing days ended. He eventually won an Emmy Award and other accolades for broadcasting and was recognized as a leading media pundit.

John Wooden once said that no greatness ever came without sacrifice. Nothing better illustrates this saying than the real story of Walton’s life. In his own words, Back from the Dead shares this dramatic story, including his basketball and broadcasting careers, his many setbacks and rebounds, and his ultimate triumph as the toughest of champions.

Bill Walton was NCAA player of the year at UCLA from 1972 to 1974, when UCLA set an NCAA record eighty-eight consecutive-game winning streak. A former NBA Champion and MVP, he was inducted into the Basketball Hall of Fame and selected as one of the NBA’s Fifty Greatest Players ever. He has also had a successful award-winning broadcasting career with ABC, ESPN, NBC, MSNBC, CBS, Turner, and Fox, among others. He currently resides in his hometown of San Diego with his family. Visit him at BillWalton.com.

“Bill Walton won at every level with extraordinary skill and intelligence. Yet more importantly, he continues to win in the game of life.”
— Bill Russell, Bill Walton’s favorite player ever

“Elegaic yet exuberant. . . . A celebration of a life in sports that is also a frank assessment of the toll basketball took on his body. . . . [Walton] writes writes with admirable candor.”
— John Swansburg

“A remarkable journey of resilience, reinvention and ultimate triumph told in the unique voice of one of the great pundits—and players—of our generation.”
— David J. Stern, NBA Commissioner Emeritus

“This isn’t a basketball story, it’s a story of victory over adversity and the Tao of positive thinking. Quitters never win and winners never quit. Bill Walton is a winner.”
— Mickey Hart, Drummer/Percussionist, Grateful Dead

“Bill Walton played the game of life with the same verve as he did the game of basketball, even in the face of crippling injuries and withering pain. Funny, poignant and inspiring, Back from the Dead is a rollicking, riveting memoir, told with characteristic honesty by one of America’s most compelling personalities.”
— David Axelrod, Author of BELIEVER: My Forty Years in Politics

“Larger than life, with a heart and soul to match his reach and accomplishments, Bill Walton has written a compelling autobiography, Back from the Dead. This is Walton at his best, a great friend who helps you overcome even the most brutal setback.”
— Roger McNamee, tech investor, musician, Deadhead

“Walton adroitly weaves his personal and professional lives in this frequently stirring memoir. . . . [His] love for life and the people and things in it—including his college coach, John Wooden—is infectious. You can’t stop reading, or rooting for the man.”
— Publishers Weekly

"Fervent, witty. . . . One of the NBA's 50 greatest players scores another basket—a deeply personal one."
— Kirkus Reviews