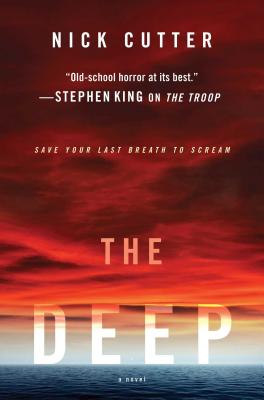 By Nick Cutter
Email or call for price
Hard to Find

From the acclaimed author of The Troop—which Stephen King raved “scared the hell out of me and I couldn’t put it down.…old-school horror at its best”—comes this utterly terrifying novel where The Abyss meets The Shining.

A strange plague called the ‘Gets is decimating humanity on a global scale. It causes people to forget—small things at first, like where they left their keys, then the not-so-small things, like how to drive or the letters of the alphabet. Their bodies forget how to function involuntarily. There is no cure.

But now, far below the surface of the Pacific Ocean, deep in the Mariana Trench, a heretofore-unknown substance hailed as “ambrosia”—a universal healer, from initial reports—has been discovered. It may just be the key to eradicating the ‘Gets.

In order to study this phenomenon, a special research lab, the Trieste, has been built eight miles under the sea’s surface. But when the station goes incommunicado, a brave few descend through the lightless fathoms in hopes of unraveling the mysteries lurking at those crushing depths…and perhaps to encounter an evil blacker than anything one could possibly imagine.

Nick Cutter is a pseudonym for an acclaimed author of novels and short stories. He lives in Toronto, Canada.

If you aren't claustrophobic now, you will be after you read THE DEEP. Terror at its best!
— Ania Ahlborn, bestselling author of The Bird Eater and Seed on THE DEEP

Fans of unflinching bleakness and all-out horror will love this novel... Disturbing.
— Publishers Weekly (starred review) on THE DEEP

“Lean and crisp and over-the-top....Disquieting, disturbing.”
— SCOTT SMITH, author of The Ruins and A Simple Plan on THE TROOP

“Nick Cutter brings a bone-chilling spin to a classic horror scenario in THE TROOP. It's Lord of the Flies meets Night of the Creeps, and I enjoyed it immensely.”
— Mira Grant, New York Times bestselling author on THE TROOP

“Nick Cutter pulls out all the stops in THE TROOP. This is a brilliant and deeply disturbing novel that you absolutely cannot put down. Highly recommended.”
— Jonathan Maberry, New York Times bestselling author of Code Zero and Dead of Night on THE TROOP

“Some thrillers produce shivers, others trigger goose bumps; Cutter's graphic offering will have readers jumping out of their skin…intense…packs a powerful punch….Readers may wish to tackle this heart-pounding novel in highly-populated, well-lit areas--snacks optional.”
— Kirkus Reviews on THE TROOP

“Suspenseful….sinister….horrifying.”
— Library Journal on THE TROOP

“THE TROOP scared the hell out of me, and I couldn't put it down. This is old-school horror at its best. Not for the faint-hearted, but for the rest of us sick puppies, it's a perfect gift for a winter night.”
— STEPHEN KING on THE TROOP
My Account • Sign In • Sign Out • Register
NEW & USED BOOKS
AUTHOR EVENTS • GIFTS
Tempe
6428 South McClintock Drive
480.730.0205
[Google Map]
10am-7pm daily
Trade Counter 11am-6pm daily