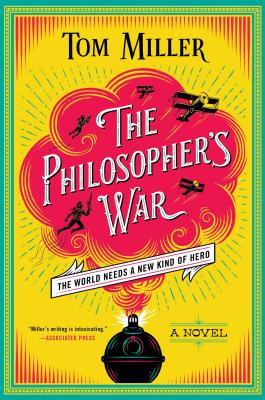 By Tom Miller
$26.99
Not Available In-Store - Usually Ships from Warehouse in 1-5 Days

This is book number 2 in the The Philosophers Series series.

The second book in the thrilling series that began with The Philosopher’s Flight finds Robert Canderelli Weekes as a rookie Rescue and Evacuation flier on the front lines of World War I in France. He came to save lives, but has no idea how far he’ll have to go to win the war.

Thanks to a stunning flying performance and a harrowing shootout in the streets of Boston, Robert Canderelli Weekes’s lifelong dream has come true: he’s the first male allowed to join the US Sigilry Corps’s Rescue and Evacuation service, an elite, all-woman team of flying medics.

But as he deploys to France during the waning days of the Great War, Sigilwoman Third-Class Canderelli learns that carrying the injured from the front lines to the field hospital is not the grand adventure he imagined. His division, full of misfits and renegades, is stretched the breaking point and has no patience for a man striving to prove himself. Slowly, Robert wins their trust and discovers his comrades are plotting to end the Great War by outlawed philosophical means. Robert becomes caught up in their conspiracy, running raids in enemy territory and uncovering vital intelligence. Friends old and new will need his help with a dangerous scheme that just might win the war overnight and save a few million lives. But the German smokecarvers have plans of their own: a devastating all-out attack that threatens to destroy the Corps and France itself. Naturally, Robert is trapped right in the thick of it.

The Philosopher’s War is the electrifying next chapter in Robert Weekes’s story, filled with heroic, unconventional women, thrilling covert missions, romance and, of course, plenty of aerial adventures. The second book in a series “that grabs readers from its opening lines and doesn’t loosen its grip or lessen its hold all the way through” (Associated Press), Tom Miller again brings Robert’s world to life with unrivaled imagination, ambition, and wit.

PRAISE FOR THE PHILOSOPHER'S WAR (BOOK 2)

"An even more propulsive follow-up to emergency physician Miller's imaginative debut, The Philosopher's Flight. A fantastic example of worldbuilding on a grand scale that combines cinematic action with historical accuracy to great effect. [With]  Miller's concept of "empirical philosophers," nearly all women who practice a kind of magic that employs glyphs and sigils penned with silver chloride, not to mention a few more complicated potions, to enable healing, smoke summoning, and, most importantly, flight. Imagine Quidditch on steroids plunged into the First World War and you'll get an idea of what to expect here. Miller has accomplished something really grand here: Despite its lone fantasy element, this is a visceral war novel that blends into a twisty spy novel with brief interludes of heated romance between Weekes and his beloved Danielle Hardin, not to mention the quiet yearnings of Weekes' best friend, Essie Stewart, who secretly loves him. The combat is incredibly tense, the palpable tension between characters is genuinely authentic, and the character arc that changes Weekes from an eager young soldier to a hardened veteran is truly compelling."--KIRKUS REVIEWS (STARRED REVIEW)

PRAISE FOR THE PHILOSOPHER'S FLIGHT (BOOK 1)

“[Begins] with rollicking fierceness that grabs readers from its opening lines and doesn’t loosen its grip or lessen its hold all the way through… Miller’s writing is intoxicating and one doesn’t need to be a fantasy or sci-fi fan to adore this book. One only hopes Miller can manage to take a break from doctoring to write another book and another and another.”—Kim Curtis, Associated Press

“Part thriller, part romance, part coming-of-age fantasy, The Philosopher’s Flight by debut novelist Tom Miller has already set a high bar for any book vying to be the most entertaining novel of 2018…The wild and soaring The Philosopher’s Flight is as fun a read as you’ll come across. Miller appears to have left room for more at the story’s end; let’s hope this is the start of a new series.”—Ian Schwartz, Bookpage

"A very accomplished debut....measured, compelling, and well-paced. Exceeded my expectations...The real charm of The Philosopher’s Flight is in its characterization...Miller surrounds Robert with so many varied, opinionated, and interestingly flawed—with so many intensely human—women in a complex setting that it never comes close to being such a simplistic narrative."—Liz Borke, Tor.com

"Frothy and fun...There are many opportunities to go astray in a setup like this, but Robert's charmingly heroic character and Miller's woman-power alternate history set their feet right, delivering a yarn full of derring-do and historical asides."—Amazon's Ominvoracious Blog

"Miller does a fine job not only of building a fantastic magical world, but of imbuing it with a highly relatable political ambiance...The Philosopher's Flight is a book you’ll race through, not only because you want to know who won the philosopher’s race, but also to see what happens to Robert."—Book Reporter

"Readers who like to challenge themselves will have a field day with Tom Miller’s debut novel...It reads like Sinclair Lewis, but with a colorful candy coating to sweeten the bitter elements. Whether you’re delighted, intrigued, or alarmed by Mr. Miller’s America, you certainly won’t be bored. “The Philosopher’s Flight” is an excellent pick for a book club looking to expand its horizons and spark conversation."—Pittsburgh Post-Gazette

"Miller has done a clever and entertaining job of creating that world using actual history as his framework and overlaying it with the world of empirical philosophy that is rich in detail and development. This is a smart, funny book that pulls you in and keeps you going while also delivering sly social commentary."—Aspen Daily News


"Tom Miller’s tale The Philosopher’s Flight is imaginative enough that readers could almost believe they are entering a parallel universe when they open the book...Those who pick up this book will find it entertaining and satisfying on several levels."—Manhattan Mercury

"Spell-binding...a fantastical coming-of-age tale that will inspire and chill you." —Rhode Island Monthly

"A coming-of-age novel packed with adventure, romance, humor and social commentary, The Philosopher’s Flightrecalls the magic realism novels of such writers as Lewis Shiner, Tim Powers and James P. Blaylock that operate in a recognizable world where magic—empirical philosophy, or sigilry—exists as an accepted reality."—South Bend Tribune

“The Philosopher’s Flight has all the right ingredients to launch an epic story, bringing us into a vivid world rich with both history and imagination. Its narrative of magic warriors and healers feels remarkably grounded and authentic. Like his characters, Tom Miller casts a spell.”—Matthew Pearl, New York Times bestselling author of The Dante Club and The Last Bookaneer

“In his first novel, Tom Miller creates a world that feels both fantastical and authentic, and he does it with a playful spirit and sharp wit. I’d follow his hero Robert Weekes anywhere. The Philosopher’s Flight is deeply original, utterly transporting, and absolutely fun.”—Janet McNally, author of Girls in the Moon

“Tom Miller is one of the rare literary geniuses I have read who possesses a sense of humor and The Philosopher's Flight displays both qualities in heady quantities. Go along for the ride and you will be stimulated, educated, as well as happily overcome by laughter.”—William O'Rourke, author of Idle Hands and Criminal Tendencies

“Tom Miller’s a sly wizard, reminiscent of L. Frank Baum on his best days, and The Philosopher’s Flight is a thrill-a-minute, genre-busting display of narrative spells and delights.”—Valerie Sayers, author of The Powers

“The Philosopher’s Flight is a romp of a tale... it will launch a hundred thousand glyphs and sigils in every reader’s imaginations.”—Sheheryar B. Sheikh, author of The Still Point of the Turning World UZACHKN -
04/24/19 10:21:40 AM