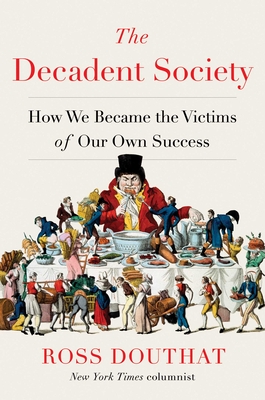 From the New York Times columnist and bestselling author of Bad Religion, a powerful portrait of how our wealthy, successful society has passed into an age of gridlock, stalemate, public failure and private despair.

Today the Western world seems to be in crisis. But beneath our social media frenzy and reality television politics, the deeper reality is one of drift, repetition, and dead ends. The Decadent Society explains what happens when a rich and powerful society ceases advancing—how the combination of wealth and technological proficiency with economic stagnation, political stalemates, cultural exhaustion, and demographic decline creates a strange kind of “sustainable decadence,” a civilizational languor that could endure for longer than we think.

Ranging from our grounded space shuttles to our Silicon Valley villains, from our blandly recycled film and television—a new Star Wars saga, another Star Trek series, the fifth Terminator sequel—to the escapism we’re furiously chasing through drug use and virtual reality, Ross Douthat argues that many of today’s discontents and derangements reflect a sense of futility and disappointment—a feeling that the future was not what was promised, that the frontiers have all been closed, and that the paths forward lead only to the grave.

In this environment we fear catastrophe, but in a certain way we also pine for it—because the alternative is to accept that we are permanently decadent: aging, comfortable and stuck, cut off from the past and no longer confident in the future, spurning both memory and ambition while we wait for some saving innovation or revelations, growing old unhappily together in the glowing light of tiny screens.

Correcting both optimists who insist that we’re just growing richer and happier with every passing year and pessimists who expect collapse any moment, Douthat provides an enlightening diagnosis of the modern condition—how we got here, how long our age of frustration might last, and how, whether in renaissance or catastrophe, our decadence might ultimately end.

Ross Douthat is a columnist for the New York Times op-ed page. He is the author of To Change the Church, Bad Religion, and Privilege, and coauthor of Grand New Party. Before joining the New York Times, he was a senior editor for the Atlantic. He is the film critic for National Review, and he cohosts the New York Times’s weekly op-ed podcast, The Argument. He lives in New Haven with his wife and four children.

“Well-timed . . . This is a young man’s book. Douthat can see our sclerotic institutions clearly because his vision is not distorted by out-of-date memories from a more functional era. . . . Charming and persuasive." —Peter Thiel for First Things

“A scintillating diagnosis of social dysfunctions . . . His analysis is full of shrewd insights couched in elegant, biting prose. . . . The result is a trenchant and stimulating take on latter-day discontents.” —Publishers Weekly (starred review)

“Ross Douthat is the rare pundit who has managed to keep his head through the ideological turbulence of recent times — and his new book grows out of his characteristic equanimity and good sense.” —Damon Linker, The Week

“Douthat’s best book yet, a work of deep cultural analysis, elegantly written and offering provocative thoughts on almost every page. It’s hard to think of a current book that is as insightful about the way we live now as is this one.” —Rod Dreher, The American Conservative

“It is a testament to [Douthat's] singular skill and wisdom, then, that he has written so thoughtful and compelling a book that bemoans the end of progress. The Decadent Society is Douthat at his best—clever, considered, counterintuitive, and shot through with insight about modern America.” —The Washington Free Beacon

"A convincing argument." —The National Review

"A substantial book by one of the more serious people in American public life today, The Decadent Society deserves a wide readership." —The New Atlantis

Praise for To Change the Church:

"Erudite and thought-provoking . . . Weaves a gripping account of Vatican politics into a broader history of Catholic intellectual life to explain the civil war within the church . . . Douthat manages in a slim volume what most doorstop-size, more academic church histories fail to achieve: He brings alive the Catholic 'thread that runs backward through time and culture, linking the experiences of believers across two thousand years.' He helps us see that Christians have wrestled repeatedly with the same questions over the past two millennia." —The Washington Post