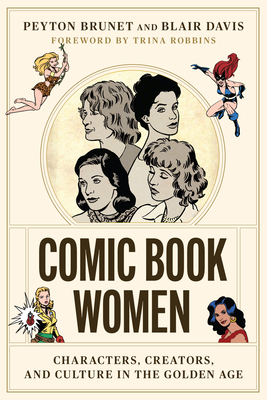 The history of comics has centered almost exclusively on men. Comics historians largely describe the medium as one built by men telling tales about male protagonists, neglecting the many ways in which women fought for legitimacy on the page and in publishers’ studios. Despite this male-dominated focus, women played vital roles in the early history of comics. The story of how comic books were born and how they evolved changes dramatically when women like June Tarpé Mills and Lily Renée are placed at the center rather than at the margins of this history, and when characters such as the Black Cat, Patsy Walker, and Señorita Rio are analyzed.

Comic Book Women offers a feminist history of the golden age of comics, revising our understanding of how numerous genres emerged and upending narratives of how male auteurs built their careers. Considering issues of race, gender, and sexuality, the authors examine crime, horror, jungle, romance, science fiction, superhero, and Western comics to unpack the cultural and industrial consequences of how women were represented across a wide range of titles by publishers like DC, Timely, Fiction House, and others. This revisionist history reclaims the forgotten work done by women in the comics industry and reinserts female creators and characters into the canon of comics history.

Peyton Brunet is a graduate of DePaul University’s communication and media master’s program.

Blair Davis is an associate professor of media and cinema studies at DePaul University. He is the author of Movie Comics: Page to Screen/Screen to Page, Comic Book Movies, and The Battle for the Bs: 1950s Hollywood and the Rebirth of Low-Budget Cinema.

Comic Book Women is a necessary counterweight to...male-centric [comic book creator] biographies...Brunet and Davis take a fresh look at the early days of comics, focusing on the women who helped to build up the industry—and who were subsequently erased from the history books.
— Book Riot

A comprehensive look at the important role female creators played in the production of the media in the Golden Age of Comics...Comic Book Women is thoughtful and well-researched, guiding us to not only reexamine comics history but also to push for more accountability and intersectionality in the modern canon.
— ANTIGRAVITY Magazine