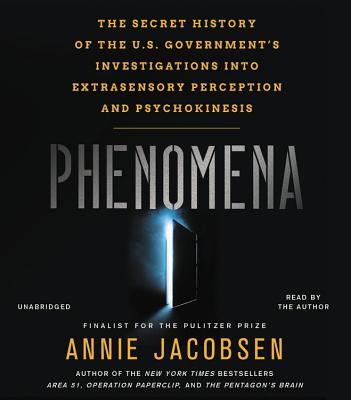 One of The Washington Post's most anticipated books of 2017

One of USA Today's New and Noteworthy Picks!


"With Phenomena, Annie Jacobsen has once again produced an utterly absorbing and brilliantly reported chronicle that truly breaks new ground. This is a boundary-breaking story of mental phenomena-extra sensory perception techniques-that is truly a pleasure to read. A mind-bending triumph!"—Alex Kershaw, bestselling author of The Liberator and Avenue of Spies

"Jacobsen journeys into the realm where the paranormal and the bureaucratic meet.... she looks into the men-who-stare-at-goats investigations of the government, programs born of the Cold War and the need to combat the Red Menace on all fronts, including the extrasensory.... entertaining reading... The occultly inclined will by duly enchanted."—Kirkus

"Richly researched.... Jacobsen shows that, in the face of inexplicable events, even 'the most pragmatic, commonsense thinkers found themselves uncertain.'"—The New Yorker

"Annie Jacobsen has written an entertaining narrative of the many salaried people in our government who have supported the exploration of psychic phenomena....Much of the information presented is already known, but Jacobsen has accomplished the gargantuan feat of bulldozing it all into one place. She has a keen eye for amusing anecdotes, and writes them up with convincing detail. More than that, Jacobsen has arranged her story in a kind of nonfiction picaresque novel."—Dick Teresi, New York Times Book Review

"Annie Jacobsen is back with a new tome that should entice anyone who doesn't mind thinking outside the box; or as referenced in her book, as if there is no box....Not only is it a well-researched and fascinating tale, but there are some lessons for anyone wanting to truly break the mold in business."—Simon Constable, Forbes

"A nonfiction story with a sci-fi feel"—Time Magazine

"Filled with the intrigue and high stakes of a spy novel, Jacobsen's history of DARPA is as much a fascinating testament to human ingenuity as it is a paean to endless industrial warfare and the bureaucracy of the military-industrial complex."—Kirkus Reviews

"Important, superbly written.... Jacobsen's book allows us to explore these questions with the ultimate tool: hard evidence. She confronts us with the full extent of Paperclip's deal with the devil, and it's difficult to look away."—Matt Damsker, USA Today (4 stars)

"With Annie Jacobsen's OPERATION PAPERCLIP for the first time the enormity of the effort has been laid bare. The result is a book that is at once chilling and riveting, and one that raises substantial and difficult questions about national honor and security...This book is a remarkable achievement of investigative reporting and historical writing."—Boston Globe

"As comprehensive as it is critical, this latest expose from Jacobsen is perhaps her most important work to date.... Jacobsen persuasively shows that it in fact happened and aptly frames the dilemma.... Rife with hypocrisy, lies, and deceit, Jacobsen's story explores a conveniently overlooked bit of history."—Publishers Weekly (starred)