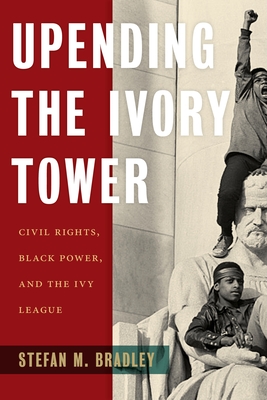 Winner, 2019 Anna Julia Cooper and C.L.R. James Award, given by the National Council for Black Studies

The inspiring story of the black students, faculty, and administrators who forever changed America's leading educational institutions and paved the way for social justice and racial progress
The eight elite institutions that comprise the Ivy League, sometimes known as the Ancient Eight--Harvard, Yale, Princeton, Penn, Columbia, Brown, Dartmouth, and Cornell--are American stalwarts that have profoundly influenced history and culture by producing the nation's and the world's leaders. The few black students who attended Ivy League schools in the decades following WWII not only went on to greatly influence black America and the nation in general, but unquestionably awakened these most traditional and selective of American spaces. In the twentieth century, black youth were in the vanguard of the black freedom movement and educational reform. Upending the Ivory Tower illuminates how the Black Power movement, which was borne out of an effort to edify the most disfranchised of the black masses, also took root in the hallowed halls of America's most esteemed institutions of higher education. Between the close of WWII and 1975, the civil rights and Black Power movements transformed the demographics and operation of the Ivy League on and off campus. As desegregators and racial pioneers, black students, staff, and faculty used their status in the black intelligentsia to enhance their predominantly white institutions while advancing black freedom. Although they were often marginalized because of their race and class, the newcomers altered educational policies and inserted blackness into the curricula and culture of the unabashedly exclusive and starkly white schools. This book attempts to complete the narrative of higher education history, while adding a much needed nuance to the history of the Black Power movement. It tells the stories of those students, professors, staff, and administrators who pushed for change at the risk of losing what privilege they had. Putting their status, and sometimes even their lives, in jeopardy, black activists negotiated, protested, and demonstrated to create opportunities for the generations that followed. The enrichments these change agents made endure in the diversity initiatives and activism surrounding issues of race that exist in the modern Ivy League. Upending the Ivory Tower not only informs the civil rights and Black Power movements of the postwar era but also provides critical context for the Black Lives Matter movement that is growing in the streets and on campuses throughout the country today. As higher education continues to be a catalyst for change, there is no one better to inform today's activists than those who transformed our country's past and paved the way for its future.

Stefan M. Bradley is Coordinator for Diversity and Inclusion Initiatives and Professor of African American Studies in the Bellarmine College of Liberal Arts at Loyola Marymount University in Los Angeles. He is author of Harlem vs. Columbia University: Black Student Power in the Late 1960s and co-editor of Alpha Phi Alpha: A Legacy of Greatness, The Demands of Transcendence.