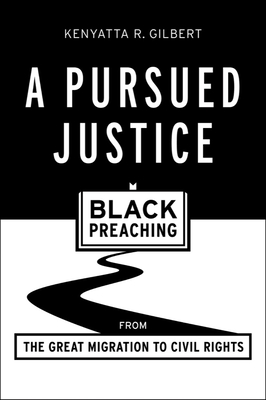 By Kenyatta R. Gilbert
Email or call for price

The narrative of Civil Rights often begins with the prophetic figure of Martin Luther King Jr. in the 1960s. City squares became a church, the body politic a congregation, and sermons a jeremiad of social change--or so the story goes. In A Pursued Justice, Kenyatta Gilbert instead traces the roots of King's call for justice to African American prophetic preaching that arose in an earlier moment of American history.

In the wake of a failed Reconstruction period, widespread agricultural depression, and the rise of Jim Crow laws, and triggered by America's entry into World War I, a flood of southern Blacks move​d from the South to the ​urban centers of the North. This Great Migration transformed northern Black churches and produced a new mode of preaching--prophetic Black preaching--which sought to address this brand new context.

Black clerics such as Baptist pastor Reverend Adam Clayton Powell Sr., A.M.E. Bishop Reverdy Cassius Ransom, and A.M.E. Zion pastor Reverend Florence Spearing Randolph rose up within these congregations. From their pulpits, these pastors "spoke truth to power" for hope across racial, ethnic, and class lines both within their congregations and between the Black community and the wider culture.

A Pursued Justice profiles these three ecclesiastically inventive clerics of the first half of the twentieth century whose strident voices gave birth to a distinctive form of prophetic preaching. Their radical sermonic response to injustice and suffering, both in and out of the Black church, not only captured the imaginations of participants in the largest internal mass migration in American history but also inspired the homiletical vision of Martin Luther King Jr. and subsequent generations of preachers of revolutionary hope and holy disobedience.