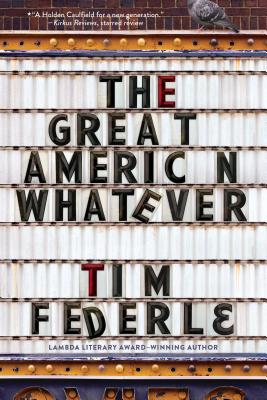 From the award-winning author of Five, Six, Seven, Nate! and Better Nate Than Ever comes “a Holden Caulfield for a new generation” (Kirkus Reviews, starred review).

Quinn Roberts is a sixteen-year-old smart aleck and Hollywood hopeful whose only worry used to be writing convincing dialogue for the movies he made with his sister Annabeth. Of course, that was all before—before Quinn stopped going to school, before his mom started sleeping on the sofa…and before the car accident that changed everything.

Enter: Geoff, Quinn’s best friend who insists it’s time that Quinn came out—at least from hibernation. One haircut later, Geoff drags Quinn to his first college party, where instead of nursing his pain, he meets a guy—okay, a hot guy—and falls, hard. What follows is an upside-down week in which Quinn begins imagining his future as a screenplay that might actually have a happily-ever-after ending—if, that is, he can finally step back into the starring role of his own life story.

Tim Federle is the showrunner and executive producer of High School Musical: the Musical: the Series, which he created for Disney+. His novels include the New York Times Notable Book Better Nate Than Ever and its Lambda Literature Award–winning sequel—which Lin-Manuel Miranda called “a wonderful evocation of what it’s like to be a theater kid” (New York Times). A film adaptation of Nate, written and directed by Federle, will premiere on Disney+ in spring 2022. The film stars Aria Brooks, Joshua Bassett, Lisa Kudrow, and Rueby Wood as Nate. Tim’s hit series of cocktail recipe books, including Tequila Mockingbird, have sold over half a million copies worldwide. He cowrote the Broadway musical adaptation of Tuck Everlastingand won the Humanitas Prize for cowriting the Golden Globe and Academy Award–nominated Best Animated Feature Ferdinand, starring John Cena and Kate McKinnon. A former Broadway dancer, Tim was born in San Francisco, grew up in Pittsburgh, and now divides his time between Los Angeles and the internet.

"The Great American Whatever knocked me out. Tim Federle writes with a rare voice — original, authentic, engaging."
— Rob Thomas, author of Rats Saw God and creator of Veronica Mars

"A raw nerve of a book—so perfectly tender and funny and true. My heart now belongs to The Great American Whatever. Officially. Completely."
— Becky Albertalli, author of Simon Vs. The Homo Sapiens Agenda

"The mix of vulnerability, effervescence, and quick wit in Quinn’s narration will instantly endear him to readers."
— Publishers Weekly

"Recommended for mature teens who want to be inspired."
— VOYA

"Federle’s YA debut takes its place in the lineage of Stephen Chbosky’s The Perks of Being a Wallflower and John Green’s coming-of-age tales."
— Horn Book Magazine