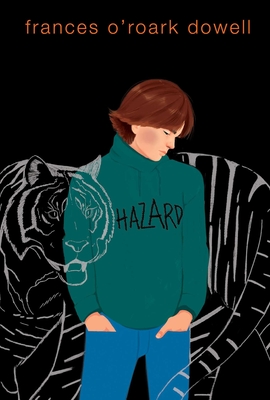 A kid filled with rage, suspended from the football team for unsportsmanlike conduct, and his father, newly home from the war in Afghanistan, reckon with the injuries they’ve caused to others and themselves in this unflinching middle grade novel in verse about love and forgiveness.

Hazard’s a military kid, best known for his prowess at football, and his short fuse. His dad’s been in Afghanistan, third tour. The worry and the pressure over school and his dad are getting to Hazard until one day, the fuse sets off and the repercussions have him benched for six games and assigned to go to therapy. Which is where his dad is as well, at Walter Reed Medical Center, because he’s home now—well, most of him. Hazard’s dad’s now learning to walk with a prosthetic, but that’s not his primary injury. His worst wound is a moral injury: what he did on the battleground that he may never be able to forgive himself for.

As part of Hazard’s therapy, he has to trace back the causes of his own anger by tracing back his father’s journey, through letters and emails and texts, so that he can come to terms with what he himself has done—his own moral injury—and help his father overcome his own.

Frances O’Roark Dowell is the bestselling and critically acclaimed author of Dovey Coe, which won the Edgar Award and the William Allen White Award; Where I’d Like to Be; The Secret Language of Girls and its sequels The Kind of Friends We Used to Be and The Sound of Your Voice, Only Really Far Away; Chicken Boy; Shooting the Moon, which was awarded the Christopher Award; the Phineas L. MacGuire series; Falling In; The Second Life of Abigail Walker, which received three starred reviews; Anybody Shining; Ten Miles Past Normal; Trouble the Water; the Sam the Man series; The Class; How to Build a Story; and most recently, Hazard. She lives with her family in Durham, North Carolina. Connect with Frances online at FrancesDowell.com.