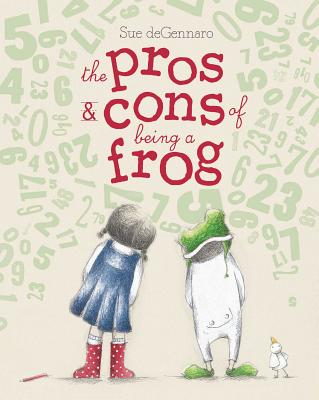 This brilliant little picture book made my entire day when I first read it and I can't stop talking about it. It tells the story of a shy little boy who wears costumes to feel brave but can't quite find the right costume. Along comes Camille on the day he's been chased by a dog while wearing a cat costume and helps him find the perfect costume: a frog. Camille is a little different too, she loves math so much that sometimes she only speaks in numbers; 23 is yes, 17 is no, and he knows it's time for lunch when she starts singing her 6 times tables. This book is perfect for any kid who feels a little different or shy and especially great for kids who may be on the Autism spectrum.

“This celebration of differences displays great respect for readers' intelligence and yields more with each reading. —Kirkus Reviews (starred review)

Two shy kids discover the power of friendship in this charming picture book that celebrates being different.

A boy likes to dress as a cat, but his best friend’s dog objects. What will he dress as now? A giraffe? A fox? A shark? When his best friend, Camille, suggests a frog, they work together to make the frog costume…until Camille runs out of patience. So the boy makes a list of the pros and cons of being a frog:

Pros:
1. My friend Camille gave me the idea
2. I’m less likely to be chased by a dog
3. Being in a frog costume makes me feel brave

Cons:
1. Not everyone loves wearing a frog costume as much as me
2. If you start getting bossy about your frog costume then your friend will get up and leave
3. A frog is NOT a solitary creature so it is no fun for a frog if his friend gets up and leaves

Luckily, he won’t have to choose, because true friendship means accepting each other’s differences: he can be himself and have his friend Camille.

Sue deGennaro is the illustrator of eleven picture books. The Pros & Cons of Being a Frog is the first picture book that she also wrote. It was shortlisted for the Childrens Book Council’s Book of the Year Award and received a Notable Award in the picture book category in her native Australia. Visit her online at SuedeGennaro.com.

Sue deGennaro is the illustrator of eleven picture books. The Pros & Cons of Being a Frog is the first picture book that she also wrote. It was shortlisted for the Childrens Book Council’s Book of the Year Award and received a Notable Award in the picture book category in her native Australia. Visit her online at SuedeGennaro.com.

This celebration of differences displays great respect for readers' intelligence and yields more with each reading.
— Kirkus, STARRED REVIEW

The boy’s costume-making and Camille’s fondness for math defy gender stereotypes, while Camille’s quirks are typical of children whose intellectual abilities outstrip their social skills. Their mutual recognition of each other’s gifts and habits should be a welcome example for children forging their own friendships.

Set against a soothing beige backdrop, the illustrations are rendered in collage, Conte crayon, and pencil and ink. They are detailed yet playful and invite readers to linger over each page. Marvelous images of numbers and graphs are peppered throughout, and the sketches of frogs beg to be closely examined.
— School Library Journal

In this playful, multilayered story about friendship, a boy who likes to dress up as animals meets a girl who loves numbers. When our narrator first meets Camille, he’s dressed as a cat and is being chased by a dog (“It was more attention than I wanted”). Camille, who “loves math so much that some days she only talks in numbers,” suggests he try a new animal, and the two forge a friendship as they try to make a perfect frog costume. When the frustrations of the task lead to a spat, the boy drafts an apology via a list of the pros and cons of being a frog. The collage illustrations are detailed and whimsical. Math-loving Camille is often depicted against a backdrop of graphs and numbers. “I’ve worked out that 23 is yes and 17 is no,” says the boy, and when the two fight, Camille storms off the page, a cluster of 17s floating along behind her. Lively, visually appealing, and an ultimately affirming tale of friendship.
— Booklist