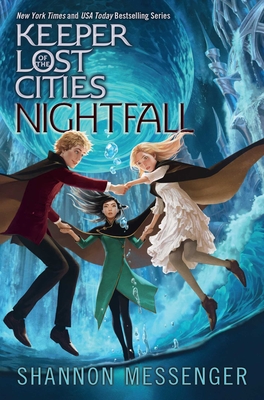 Sophie and her friends face battles unlike anything they’ve seen before in this thrilling sixth book of the Keeper of the Lost Cities series.

Sophie Foster is struggling. Grieving. Scrambling. But she knows one thing: she will not be defeated.

The Neverseen have had their victories—but the battle is far from over. It’s time to change tactics. Make sacrifices. Reexamine everything. Maybe even time for Sophie to trust her enemies.

All paths lead to Nightfall—an ominous door to an even more ominous place—and Sophie and her friends strike a dangerous bargain to get there. But nothing can prepare them for what they discover. The problems they’re facing stretch deep into their history. And with time running out, and mistakes catching up with them, Sophie and her allies must join forces in ways they never have before.

In this spectacular sixth book in the New York Times and USA TODAY bestselling Keeper of the Lost Cities series, Sophie must uncover the truth about the Lost Cities’ insidious past, before it repeats itself and changes reality.

Shannon Messenger graduated from the USC School of Cinematic Arts, where she learned—among other things—that she liked watching movies much better than making them. She’s studied art, screenwriting, and film production, but she realized her real passion was writing stories for children. She’s the New York Times and USA TODAY bestselling author of the award-winning middle grade series, Keeper of the Lost Cities, as well as the Sky Fall series for young adults. Her books have been featured on multiple state reading lists, published in numerous countries, and translated into many different languages. She lives in Southern California with her family—and an embarrassing number of cats. Find her online at ShannonMessenger.com.