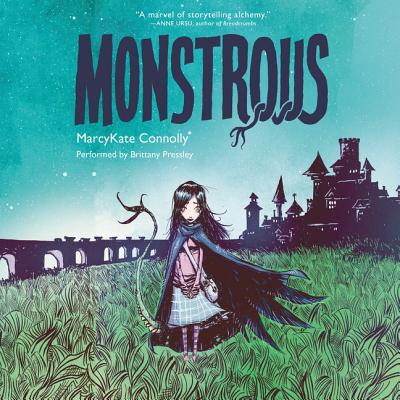 With a nod to classic fairy tales, Monstrous is a fascinating debut about a young chimera girl. Kym was created with the sole purpose of rescuing girls from an evil wizard who wishes to kill them to cope with the loss of his own daughter. Although Kym is loyal to her father's noble mission, she becomes distracted by a boy called Ren; who seems familiar, though she's sure she's never met him before. Soon her hodgepodge brain begins remembering things that threaten to destroy everything she believes.

The city of Bryre suffers under the magic of an evil wizard. Because of his curse, girls sicken and disappear without a trace, and Bryre's inhabitants live in fear. No one is allowed outside after dark.

Despite her caution, a boy named Ren sees Kym and begins to leave a perfect red rose for her every evening. As they become friends, Kym learns that Ren knows about the missing girls, the wizard, and the evil magic that haunts Bryre.

And what he knows will change Kym's life.

Reminiscent of Frankenstein and the tales of the Brothers Grimm, this debut novel by MarcyKate Connolly stands out as a compelling, original story that has the feel of a classic.