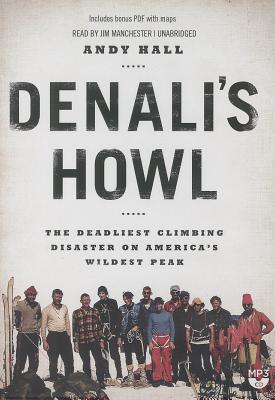 Denali's Howl is the white-knuckle account of one of the most deadly climbing disasters of all time. In 1967, twelve young men attempted to climb Alaska's Mount McKinley--known to the locals as Denali--one of the most popular and deadly mountaineering destinations in the world. Only five survived. Journalist Andy Hall, son of the park superintendent at the time, investigates the tragedy. He spent years tracking down survivors, lost documents, and recordings of radio communications. In Denali's Howl, Hall reveals the full story of an expedition facing conditions conclusively established here for the first time: at an elevation of nearly twenty thousand feet, these young men endured an "arctic superblizzard," with howling winds of up to three hundred miles an hour and wind chill that freezes flesh solid in minutes. All this was without the high-tech gear and equipment climbers use today. As well as the story of the men caught inside the storm, Denali's Howl is the story of those caught outside it trying to save them--Hall's father among them. The book gives readers a detailed look at the culture of climbing then and now and raises uncomfortable questions about each player in this tragedy. Was enough done to rescue the climbers, or were their fates sealed when they ascended into the path of this unprecedented storm?
My Account • Sign In • Sign Out • Register
NEW & USED BOOKS
AUTHOR EVENTS • GIFTS
Tempe
6428 South McClintock Drive
480.730.0205
[Google Map]
Sun-Fri: 10am-7pm
Sat: 9am-7pm