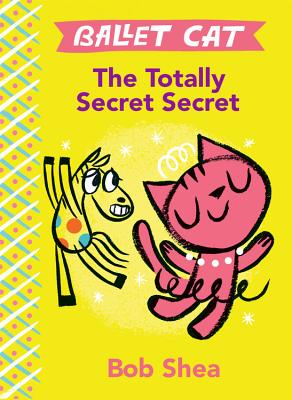 This is book number 1 in the Ballet Cat series.

Ballet Cat loves to leap! Sparkle Pony would rather play checkers. Ballet Cat wants to twirl! Sparkles wants to make lemonade instead. Ballet Cat tells him to kick! How will Sparkles ever be able to tell Ballet Cat that he doesn't love dancing as much as she does? What if it ruined their friendship? Bob Shea is a master at tackling real kid's issues with playfulness and compassion. With an awesome electric color scheme and wonderfully expressive characters, this beginning reader teaches kids not to be afraid of voicing their feelings -- and shows the give and take of true friendship.

Bob Shea has created many hilarious books for young people, including Crash, Splash or Moo!, the popular Dinosaur Vs. series, Unicorn Thinks He's Pretty Great, Unicorn is Maybe Not so Great After All, and the early readers featuring Ballet Cat. He has also written stories such as Who Wet My Pants?, illustrated by Zachariah OHora. He lives in Madison, Connecticut and invites you to visit him at bobshea.com.

PRAISE FOR DINOSAUR VS. SANTA


"Energetic, retro mixed-media illustrations depict Dinosaur in a series of fabulous Christmas sweaters, smothering the bottom third of the tree in ornaments and lights, and roaring his way through the best Christmas ever. A must for most collections."
—School Library Journal

PRAISE FOR DINOSAUR VS. SCHOOL

". . .Shea's concept of "winning" at school clearly has to do with self-confidence, determination and, sometimes, teamwork-a winning idea indeed."—Kirkus Reviews

PRAISE FOR DINOSAUR VS. THE LIBRARY

PRAISE FOR DINOSAUR VS. THE POTTY

*"Shea's bold collages are as in-your-face charming as his energetic hero, whose exuberance and stubborn avoidance of the potty will elicit both empathy and laughter."—Publishers Weekly (starred review)


*"Shea's cleverly written tale makes this a standout, but there's substance here, too. The grass may always seem greener, but the message comes across that everybody has special strengths, and togetherness can often maximize them. This tale of discovered friendship will delight unicorn fans and perhaps create new fans for goats."
—Booklist (starred review)

PRAISE FOR BUDDY AND THE BUNNIES IN: DON'T PLAY WITH YOUR FOOD