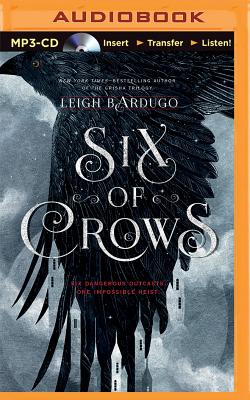 By Leigh Bardugo, Jay Snyder (Read by), Brandon Rubin (Read by)
Email or call for price
Hard to Find

Looking for a fast paced adventure with magic, impossible odds, and group of outcast who never thought they’d be the good guys? If you’ve read her other novels, you will love this new story by Leigh Bardugo set after the Grisha Trilogy. Six of Crows follows the story of six people who don’t seem like your typical heroes; a master thief, a spy, a sharp shooter, a runaway, a heartrender, and a convict. Together this crew goes to pull off one of the biggest heists anyone has ever tried and they might just end up saving the world while they’re at it. By the end you will be dying for the sequel like I am!

“An impossible heist, a fantasy world, and a crew of six very different people brought together in their quest for a life-changing fortune. Quietly dazzling in its complexity, Leigh Bardugo’s newest is the type of book that makes the rest of the world drop away while reading it. This book will consume you in the way only a brilliant fantasy book can. With characters that felt so real I wanted to meet them, and an action packed plot with plenty of subterfuge, intrigue, and complicated relationships, this book will quickly vault to the top of your favorite books list and firmly entrench itself there… at least until the sequel.”
— Phoebe Dyer, Boswell Book Company, Milwaukee, WI

Ketterdam: a bustling hub of international trade where anything can be had for the right price--and no one knows that better than criminal prodigy Kaz Brekker. Kaz is offered a chance at a deadly heist that could make him rich beyond his wildest dreams. But he can't pull it off alone....

A convict with a thirst for revenge.

A sharpshooter who can't walk away from a wager.

A runaway with a privileged past.

A spy known as the Wraith.

A Heartrender using her magic to survive the slums.

A thief with a gift for unlikely escapes.

Six dangerous outcasts. One impossible heist. Kaz's crew is the only thing that might stand between the world and destruction-if they don't kill each other first.