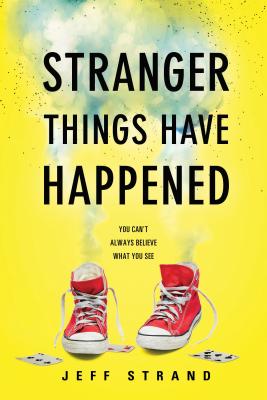 "This book would be a good stepping stone for those readers who enjoy the Diary of a Wimpy Kid series."—School Library Connection

Jeff Strand's signature humor returns in this tale of magic, illusions, and self-discovery.

Okay, so Marcus isn't a famous magician. He may not even be a great magician. But his great-grandfather, the once-legendary and long-retired Zachary the Stupendous, insists Marcus has true talent. And when Grandpa Zachary boasts that he and Marcus are working on an illusion that will shock, stun, and astonish, Marcus wishes he could make himself disappear.

The problem? Marcus also has stage fright—in spades. It's one thing to perform elaborate card tricks in front of his best friend, Kimberly, but it's an entirely different feat to perform in front of an audience.

Then Grandpa Zachary dies in his sleep.

To uphold his great-grandfather's honor, the show must go on. It would take a true sorcerer to pull off the trick Marcus has planned. But maybe he's the next best thing…

JEFF STRAND lives in Tampa, Florida, and doesn’t believe in voodoo. But he still thinks you should carry a doll around, go up to people you don’t like, and chuckle while you jab it with pins, just to make them squirm. Poke around his gleefully macabre website at www.JeffStrand.com.

"leave(s) readers weak with laughter...Marcus is enough of a winner to earn both admiration and enthusiastic applause. " — Booklist, starred review

"Strand maintains a taut pace with cliff-hanger endings to each chapter, even as he explores larger themes of confidence, perseverance, loyalty, peer pressure, bullying, family relationships, and the role of practice in developing skills." — School Library Journal

"This book would be a good stepping stone for those readers who enjoy the Diary of a Wimpy Kid series." — School Library Connection