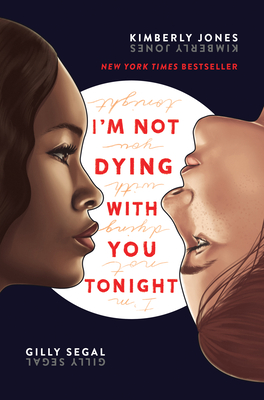 This book is relentless by design and expertly executed. Two girls from opposite social circles get caught in a riot and become each other's salvation -- reluctantly and skeptically. Their tenuous relationship ebbs and flows like the riot around them. In the quiet moments, their personal tensions simmer and sometimes boil over. But in the threatening moments, they protect each other at all costs. Set aside some time to read this book in one setting because it once it starts, it does not let up. — From Sarah's Picks

"An absolute page turner, I'm Not Dying with You Tonight is a compelling and powerful novel that is sure to make an impact. " --Angie Thomas, New York Times bestselling author of The Hate U Give

An NAACP Image Award Nominee, I'm Not Dying with You Tonight follows two teen girls--one black, one white--who have to confront their own assumptions about racial inequality as they rely on each other to get through the violent race riot that has set their city on fire with civil unrest.

Lena has her killer style, her awesome boyfriend, and a plan. She knows she's going to make it big. Campbell, on the other hand, is just trying to keep her head down and get through the year at her new school.

When both girls attend the Friday-night football game, what neither expects is for everything to descend into sudden mass chaos. Chaos born from violence and hate. Chaos that unexpectedly throws them together.

They aren't friends. They hardly understand the other's point of view. But none of that matters when the city is up in flames, and they only have each other to rely on if they're going to survive the night.

This book is perfect for:

Additional Praise for I'm Not Dying with You Tonight:
"A vital addition to the YA race relations canon." --Nic Stone, New York Times bestselling author of Dear Martin

"An astounding achievement. This novel is an incendiary experience, one that does not shy away from difficult questions about privilege and violence. But Jones and Segal don't hold our hands to provide us easy answers; this is a book meant to be devoured in a single sitting and discussed for years to come." --Mark Oshiro, author of Anger is a Gift

"I'm Not Dying With You Tonight is a powerful examination of privilege, and how friends are often found in surprising places. Jones and Segal have penned a page-turning debut, as timely as it is addictive." --David Arnold, New York Times bestselling author of Mosquitoland and Kids of Appetite

GILLY SEGAL spent her college years in Israel and served in the IDF. She is currently a lawyer for an advertising agency. She lives in Atlanta, Georgia. Visit gillysegal.com.KIM JONES is the former manager of the bookstore Little Shop of Stories and currently works in the entertainment industry. She lives in Atlanta, Georgia.
My Account • Sign In • Sign Out • Register
NEW & USED BOOKS
AUTHOR EVENTS • GIFTS
Tempe
6428 South McClintock Drive
480.730.0205
[Google Map]
Sunday-Friday 10am-8pm
Saturday 9am-8pm
Trade Counter 11am-6pm daily