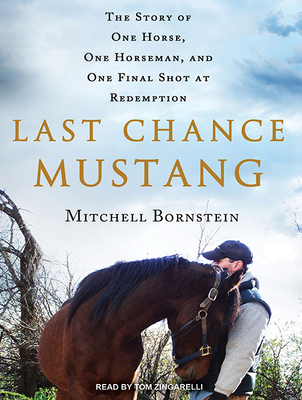 By Mitchell Bornstein, Tom Zingarelli (Narrated by)
Email or call for price
Hard to Find

The thing I loved most about this book was its authenticity. Bornstein's journey with Samson has the ending you hope for when working with an abused animal - that ultimately the animal overcomes most of his issues and learns to trust again - but Bornstein doesn't gloss over the fact that dealing with an abused half-ton animal can be incredibly dangerous (in Samson's case, probably insanely dangerous), that there will always be good days and bad days, and that - like humans - most animals will never fully overcome a history of neglect, and that their past is something to be accepted and worked with, not something to be held against them.

Last Chance Mustang is the story of Samson, a formerly free-roaming, still wild-at-heart American mustang that was plucked from his mountainous Nevada home and thrown into the domestic horse world where he was brutalized and victimized. After years of abuse, Samson had evolved into a hateful and hated, maladjusted beast until the day he found his way to a rural Illinois farm, an ill-equipped owner, and one last chance. Mitch Bornstein's task was to tame the violent beast whose best defense had become offense. He had twenty years of experience fixing unfixable horses, but Samson would be his greatest challenge. Through the pair's many struggles and countless battles, Samson would teach Mitch about the true power of hope, friendship, redemption and the inspiring mettle of the forever wild and free American mustang.
My Account • Sign In • Sign Out • Register
NEW & USED BOOKS
AUTHOR EVENTS • GIFTS
Tempe
6428 South McClintock Drive
480.730.0205
[Google Map]
10am-7pm daily