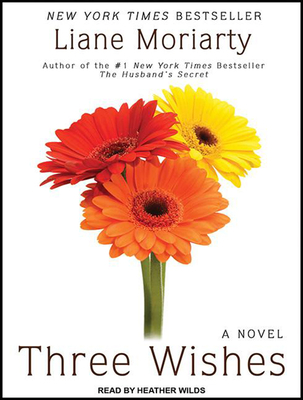 By Liane Moriarty, Heather Wilds (Narrated by)
Email or call for price
Out of Print

Lyn, Cat, and Gemma Kettle, beautiful thirty-three-year-old triplets, seem to attract attention everywhere they go. Whenever they're together, laughter, drama, and mayhem seem to follow. But apart, each is very much her own woman, dealing with her own share of ups and downs. Lyn has organized her life into one big checklist, juggling the many balls of work, marriage, and motherhood with expert precision, but is she as together as her datebook would have her seem? Cat has just learned a startling secret about her marriage-can she bring another life into her very precarious world? And can free-spirited Gemma, who bolts every time a relationship hits the six-month mark, ever hope to find lasting love? In this wise, witty, hilarious new novel, we follow the Kettle sisters through their thirty-third year, as they struggle to survive their divorced parents' dating each other, their technologically savvy grandmother, a cheating husband, champagne hangovers, and the fabulous, frustrating life of forever being part of a threesome.

Liane Moriarty is the internationally bestselling author of "Three Wishes," "The Last Anniversary," "What Alice Forgot," "The Hypnotist's Love Story" and "The Husband's Secret." Writing as L. M. Moriarty, she is also the author of the Space Brigade books for children. Liane lives in Sydney with her husband and two small children.