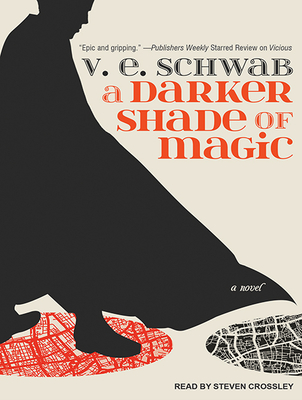 I didn't mean to read this book. I only intended to read the first page, but I suddenly found I couldn't stop, and accidentally finished the whole book in just over a day. Kell, one of two magicians left in the worlds, and Lila, a crossdressing thief with aspirations of captaining a pirate ship one day, find themselves swept up into an adventure of the most unexpected kind, and of course with danger around every corner. This book is immediately getting shelved next to my two similarly favorite fantasy books, The Night Circus, and Neverwhere. A Darker Shade of Magic transported me to an enchanting and dangerous set of worlds, and I fell utterly under its spell. Schwab writes magic as a beautiful and frightening force, and the kind that makes you pause and think…that it could all very well be possible.

Kell is one of the last Travelers-magicians with a rare, coveted ability to travel between parallel universes-as such, he can choose where he lands. There's Grey London, dirty and boring, without any magic, ruled by a mad King George. Then there's Red London, where life and magic are revered, and the Maresh Dynasty presides over a flourishing empire. There's White London, ruled by whoever has murdered their way to the throne. And once upon a time, there was Black London . . . but no one speaks of that now. Officially, Kell is the Red Traveler, personal ambassador and adopted Prince of Red London, carrying the monthly correspondences between the royals of each London. Unofficially, Kell is a smuggler, servicing people willing to pay for even the smallest glimpses of a world they'll never see-a dangerous hobby, and one that has set him up for accidental treason. Fleeing into Grey London, Kell runs afoul of Delilah Bard, a cutpurse with lofty aspirations. She first robs him, then saves him from a dangerous enemy, and then forces him to spirit her to another world for a proper adventure.
My Account • Sign In • Sign Out • Register
NEW & USED BOOKS
AUTHOR EVENTS • GIFTS
Tempe
6428 South McClintock Drive
480.730.0205
[Google Map]
Sunday-Friday 10am-8pm
Saturday 9am-8pm
Trade Counter 11am-6pm daily