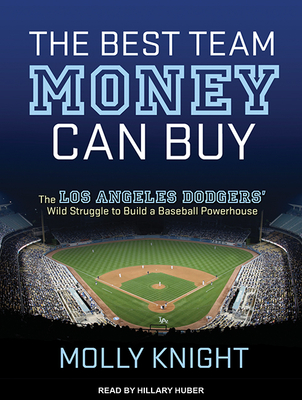 By Molly Knight, Hillary Huber (Narrated by)
$29.99
Not Available In-Store - Usually Ships from Warehouse in 1-5 Days

Love the Dodgers? Hate the Dodgers? Either way, you’ll get a lot out of The Best Team Money Can Buy. In a shallow sense, the Dodgers are portrayed as the most expensive failure in the history of baseball due to early playoff exits in consecutive years. What makes this book exceptional, though, is author Molly Knight’s access and insight into the clubhouse, normally a place of sanctity for players, and the inner workings of a professional baseball club. Personality and ideological clashes abound, important decisions are made on strange whims, and tempers flare at inopportune times. If you’re looking for a story of a dysfunctional franchise filled with overpaid, prima donna players, this book certainly has that in abundance. But more importantly, we get an example of honest sports journalism, a mostly forgotten art, where a group of guys from vastly different backgrounds attempt to come together and bring home a championship.

In 2012 the Los Angeles Dodgers were bought out of bankruptcy in the most expensive sale in sports history. Los Angeles icon Magic Johnson and his partners hoped to put together a team worthy of Hollywood. By most accounts they have succeeded, if not always in the way they might have imagined. In The Best Team Money Can Buy, Molly Knight tells the story of the Dodgers' 2013 and 2014 seasons. She shares a behind-the-scenes account of the astonishing sale of the Dodgers, revealing why the team was not overpriced, as well as what the Dodgers actually knew in advance about rookie phenom and Cuban defector Yasiel Puig. We learn how close manager Don Mattingly was to losing his job during the 2013 season-and how the team turned around the season in the most remarkable fifty-game stretch (42-8) of any team since World War II, before losing in the NLCS. Knight also provides a rare glimpse into the infighting and mistrust that derailed the team in 2014 and resulted in ridding the roster of difficult personalities and the hiring of a new front office. Exciting, surprising, and filled with juicy details, Molly Knight's account is a must-listen for baseball fans and anyone who wants the inside story of today's Los Angeles Dodgers.
My Account • Sign In • Sign Out • Register
NEW & USED BOOKS
AUTHOR EVENTS • GIFTS
Changing Hands Tempe
6428 S McClintock Dr, Tempe, AZ 85283
480.730.0205
[Google Map]
Tues-Sun: 10am-6:30pm
Mon: Closed until further notice