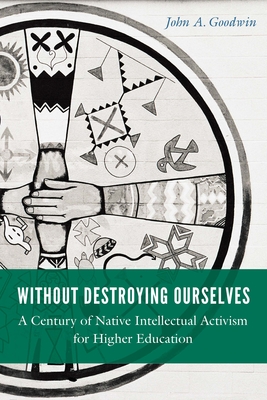 Without Destroying Ourselves is an intellectual history of Native activism seeking greater access to and control of higher education in the twentieth century. John A. Goodwin traces themes of Henry Roe Cloud’s (Ho-Chunk) vision for Native intellectual leadership and empowerment in the early 1900s to the later missions of tribal colleges and universities (TCUs) and education-based, self-determination movements of the 1960s onward.

Vital to Cloud’s work was the idea of how to build from Native identity and adapt without destroying that identity. As the central themes of the movement for Native control in higher education developed over the course of several decades, a variety of Native activists carried Cloud’s vision forward. Goodwin explores how Elizabeth Bender Cloud (Ojibwe), D’Arcy McNickle (Salish Kootenai), Jack Forbes (Powhatan-Renapé, Delaware Lenape), and others built on and contributed to this common thread of Native intellectual activism.

Goodwin demonstrates that Native activism for self-determination was never snuffed out by the swing of the federal government’s pendulum away from tribal governance and toward termination. Moreover, efforts for Native control in education remained a vital aspect of that activism. Without Destroying Ourselves documents this period through the full accreditation of TCUs in the late 1970s and reinforces TCUs’ continuing relevance in confronting the unique needs and challenges of Native communities today.

“In the face of white colonialism, Native American leaders have long had to wrestle with the timeless question: how can we change without destroying ourselves? As John A. Goodwin demonstrates in this deeply researched and thoughtful study, answering this question has always been at the heart of Native intellectuals’ efforts to create a model of higher education both by and for Indians. To understand the multiple struggles they encountered in this journey—a journey in which the issues of power and purpose were central—this study is must-reading.”—David Wallace Adams, author of Education for Extinction: American Indians and the Boarding School Experience, 1875–1928


“Goodwin’s sympathetic and insightful history underscores the importance of tribal colleges and universities as intellectual spaces that are educating, decolonizing, and sustaining the tribal communities they serve. This book fills a gaping void in American Indian historiography and will undoubtedly transform how scholars think about Indian education.”—Bradley Shreve, editor of Tribal College Journal of American Indian Higher Education