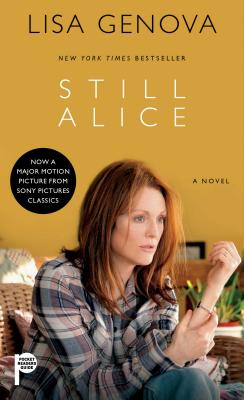 “This wonderful debut novel tells the story of 50-year-old Harvard professor Alice Howland as she grapples with early-onset Alzheimer's disease. Lisa Genova's writing style, and her compelling story, will leave you thinking of, and wanting to talk about, Alice after finishing this powerful, beautiful work.”
— Caitlin Doggart, Where the Sidewalk Ends, Chatham, MA

“Still Alice tells the story of a 50-year-old Harvard psychology and linguistics professor in the year following diagnosis of early onset Alzheimer's disease. Her struggles with the effect on her work life, and her family's attempts to cope, are compelling and entirely believable. Genova's doctorate in neuroscience lets information flow naturally as part of a tender story, perfect for book groups.”
— Carla Jimenez, Inkwood Books, Tampa, FL

Alice Howland is proud of the life she worked so hard to build. At fifty years old, she’s a cognitive psychology professor at Harvard and a world-renowned expert in linguistics with a successful husband and three grown children. When she becomes increasingly disoriented and forgetful, a tragic diagnosis changes her life—and her relationship with her family and the world—forever. As she struggles to cope with Alzheimer’s, she learns that her worth is comprised of far more than her ability to remember.

At once beautiful and terrifying, Still Alice is a moving and vivid depiction of life with early-onset Alzheimer’s disease that is as compelling as A Beautiful Mind and as unforgettable as Ordinary People.

Acclaimed as the Oliver Sacks of fiction and the Michael Crichton of brain science, Lisa Genova is the New York Times bestselling author of Still Alice, Left Neglected, Love Anthony, Inside the O’Briens, and Remember. Still Alice was adapted into an Oscar-winning film starring Julianne Moore, Alec Baldwin, and Kristen Stewart. Lisa graduated valedictorian from Bates College with a degree in biopsychology and holds a PhD in neuroscience from Harvard University. She travels worldwide speaking about the neurological diseases she writes about and has appeared on The Dr. Oz Show, Today, PBS NewsHour, CNN, and NPR. Her TED talk, What You Can Do To Prevent Alzheimer's, has been viewed over 2 million times.