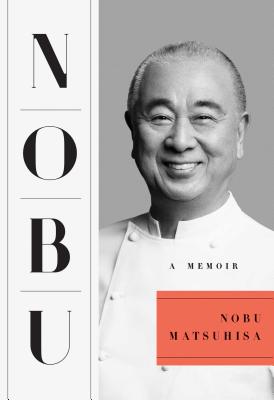 By Nobu Matsuhisa
Email or call for price
Hard to Find

“In this outstanding memoir, chef and restaurateur Matsuhisa...shares lessons in humility, gratitude, and empathy that will stick with readers long after they’ve finished the final chapter.” —Publishers Weekly (starred review)

A fascinating and unique memoir by the acclaimed celebrity chef and international restaurateur, Nobu, as he divulges both his dramatic life story and reflects on the philosophy and passion that has made him one of the world’s most widely respected Japanese fusion culinary artists.

Nobu needs no introduction. One of the world’s most widely acclaimed restaurateurs, his influence on food and hospitality can be found at the highest levels of haute-cuisine to the food trucks you frequent during the work week—this is the Nobu that the public knows.

But now, we are finally introduced to the private Nobu: the man who failed three times before starting the restaurant that would grow into an empire; the man who credits the love and support of his wife and children as the only thing keeping him from committing suicide when his first restaurant burned down; and the man who values the busboy who makes sure each glass is crystal clear as highly as the chef who slices the fish for Omakase perfectly.

What makes Nobu special, and what made him famous, is the spirit of what exists on these pages. He has the traditional Japanese perspective that there is great pride to be found in every element of doing a job well—no matter how humble that job is. Furthermore, he shows us repeatedly that success is as much about perseverance in the face of adversity as it is about innate talent.

Not just for serious foodies, this inspiring memoir is perfect for fans of Marie Kondo’s The Life-Changing Magic of Tidying Up and Danny Meyer’s Setting the Table. Nobu’s writing does what he does best—it marries the philosophies of East and West to create something entirely new and remarkable.

Nobuyuki Matsuhisa—known to the world simply as “Nobu”—is the acclaimed and highly influential chef proprietor of Nobu and Matsuhisa restaurants located across five continents. He worked at the restaurant Matsue Sushi in Shinjuku, Tokyo, for seven years and was invited by a regular customer, who was a Peruvian entrepreneur of Japanese descent, to open a Japanese restaurant in Peru. At the age of twenty-four, he moved to Lima and opened a restaurant with the same name of Matsuei in partnership with his sponsor. In 1977, he moved to Los Angeles and opened his own restaurant in Beverly Hills ten years later. The restaurant quickly became a hot spot and was frequented by Hollywood celebrities, including Robert De Niro, who invited Nobu to set up a restaurant in Tribeca. In August 1994, the two opened up Nobu to critical acclaim. He now has forty-one restaurants and seven hotels around the world.

"The secret to the appeal of this charming memoir resides in Matsuhisa's personal simplicity . . . A straightforward memoir sure to please both Nobu fans and Japanese cuisine lovers."
— Kirkus Reviews

"More than a culinary-centric memoir, the book carries the wisdom of a successful self-made man who made many mistakes and who had weaknesses and moments of despair . . . relatable life lessons from a passionate spirit are what keep the pages turning."
— Eater, The Best Food-Focused Memoirs of Fall 2017

"An insightful peek into the mind of one of the world's most successful restaurateurs."
— Library Journal

"Sweet, charming, experienced, and humble, a world-famous chef reveals the experiences that helped shape him and his thinking, and imparts meaning."
— What's Nonfiction? Blog

"Nobu is one of the good guys who has become famous by the old-fashioned tenets of being a family man, hard work, passion, and perseverance even in the face of adversity . . . This is inspiration by example."
— The Associated Press
My Account • Sign In • Sign Out • Register
NEW & USED BOOKS
AUTHOR EVENTS • GIFTS
Tempe
6428 South McClintock Drive
480.730.0205
[Google Map]
10am-7pm daily
Trade Counter 11am-6pm daily