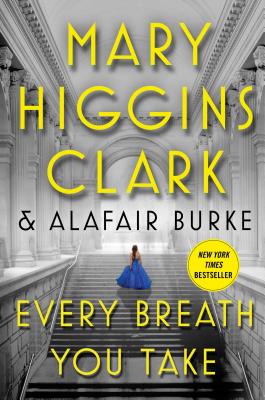 “Queen of Suspense” Mary Higgins Clark and Alafair Burke are back with their fourth book in the New York Times bestselling Under Suspicion series; Every Breath You Take follows television producer’s Laurie Moran investigation of the unsolved Met Gala murder—in which a wealthy widow was pushed to her death from the famous museum’s rooftop.

Laurie Moran’s professional life is a success—her television show Under Suspicion is a hit, both in the ratings and its record of solving cold cases. But her romantic break from former host Alex Buckley has left her with on-air talent she can’t stand—Ryan Nichols—and a sense of loneliness, despite her loving family.

Now Ryan has suggested a new case. Three years ago, Virginia Wakeling, a member of the Board of Trustees of the Metropolitan Museum of Art and one of the museum’s most generous donors, was found in the snow, after being thrown from the museum’s roof on the night of its most celebrated fundraiser, the Met Gala. The leading suspect then and now is her much younger boyfriend and personal trainer, Ivan Gray.

Ivan runs a trendy, successful boutique gym called Punch—a business funded in no small part by the late Virginia—which happens to be the gym Ryan frequents. Laurie’s skepticism about the case is upended by a tip from her father’s NYPD connection, and soon Laurie realizes there are a bevy of suspects—including Virginia’s trusted inner circle.

As the Under Suspicion crew pries into the lives of a super wealthy real estate family with secrets to hide, danger mounts for several witnesses—and for Laurie.

The #1 New York Times bestselling author Mary Higgins Clark wrote forty suspense novels, four collections of short stories, a his­torical novel, a memoir, and two children’s books. With bestselling author Alafair Burke she wrote the Under Suspicion series including The Cinderella Murder, All Dressed in White, The Sleeping Beauty Killer, Every Breath You Take, and You Don’t Own Me. With her daughter Carol Higgins Clark, she coauthored five more suspense novels. More than one hundred million copies of her books are in print in the United States alone. Her books are international bestsellers.

Alafair Burke is the Edgar-nominated, New York Times bestselling author of twelve novels, including The Wife, The Ex, If You Were Here, Long Gone, and the Ellie Hatcher series. A former prosecutor, she is now a professor of criminal law and lives in Manhattan.
My Account • Sign In • Sign Out • Register
NEW & USED BOOKS
AUTHOR EVENTS • GIFTS
Tempe
6428 South McClintock Drive
480.730.0205
[Google Map]
10am-7pm daily
Trade Counter 11am-6pm daily