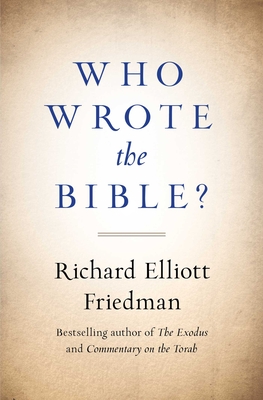 A much anticipated reissue of Who Wrote the Bible?—the contemporary classic the New York Times Book Review called “a thought-provoking [and] perceptive guide” that identifies the individual writers of the Pentateuch and explains what they can teach us about the origins of the Bible.

For thousands of years, the prophet Moses was regarded as the sole author of the first five books of the Bible, known as the Pentateuch. According to tradition, Moses was divinely directed to write down foundational events in the history of the world: the creation of humans, the worldwide flood, the laws as they were handed down at Mt. Sinai, and the cycle of Israel’s enslavement and liberation from Egypt.

However, these stories—and their frequent discrepancies—provoke questions: why does the first chapter in Genesis say that man and woman were made in God’s image, while the second says that woman was made from man’s rib? Why does one account of the flood say it lasted forty days, while another records no less than one hundred? And why do some stories reflect the history of southern Judah, while others seem sourced from northern Israel?

Originally published in 1987, Richard Friedman’s Who Wrote the Bible? joins a host of modern scholars who show that the Pentateuch was written by at least four distinct voices—separated by borders, political alliances, and particular moments in history—then connected by brilliant editors. Rather than cast doubt onto the legitimacy of the Bible, Friedman uses these divergent accounts to illuminate a text that was written by real people. Friedman’s seminal and bestselling text is a comprehensive and authoritative answer to the question: just who exactly wrote the Bible?

Richard Elliott Friedman is one of the premier bible scholars in the country. He is the Ann & Jay Davis Professor of Jewish Studies at the University of Georgia and the Katzin Professor of Jewish Civilization Emeritus of the University of California, San Diego. He is the author of Commentary on the Torah, The Disappearance of God, The Hidden Book in the Bible, The Bible with Sources Revealed, The Bible Now, The Exile and Biblical Narrative, the bestselling Who Wrote the Bible?, and his newest book, The Exodus. He was an American Council of Learned Societies Fellow and was elected to membership in The Biblical Colloquium. His books have been translated into fourteen languages.

"Brilliantly presented: there is no other book like this one. It may well be unique.” —Los Angeles Times

"Remarkable. Friedman has written that most rare of books: a legitimate intellectual contribution that is also a good read. The field of biblical studies will be enriched by this book." —Dallas Times Herald