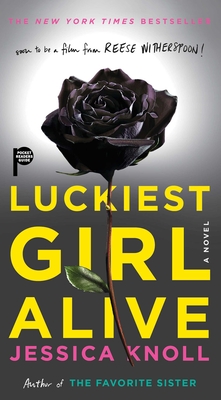 By Jessica Knoll
$9.99
Email or call for price.

The New York Times and USA TODAY bestseller that Reese Witherspoon described as “one of those reads you just can’t put down,” explores the unbearable pressure that so many women feel to “have it all” and how one young woman uses her sharp edges and cutthroat ambition to hide a scandalous truth.

There’s something else buried in her past that still haunts her, something private and painful that threatens to bubble to the surface and destroy everything. The question remains: will breaking her silence destroy all that she has worked for or will it—at long last—set Ani free?

With a singular voice and twists you won’t see coming, Luckiest Girl Alive is “nail-bitingly addictive…equal parts funny and twisted” (Glamour) and proves that the perfect life is often a perfect lie.

Jessica Knoll is the New York Times bestselling author of Luckiest Girl Alive, which has been optioned for film by Lionsgate with Reese Witherspoon set to produce. She has been a senior editor at Cosmopolitan and the articles editor at Self. She grew up in the suburbs of Philadelphia and graduated from The Shipley School in Bryn Mawr, Pennsylvania, and from Hobart and William Smith Colleges in Geneva, New York. She lives in Los Angeles with her husband and her bulldog, Beatrice. The Favorite Sister is her second novel.
My Account • Sign In • Sign Out • Register
NEW & USED BOOKS
AUTHOR EVENTS • GIFTS
Tempe
6428 South McClintock Drive
480.730.0205
[Google Map]
Sunday-Friday 10am-8pm
Saturday 9am-8pm
Trade Counter 11am-6pm daily