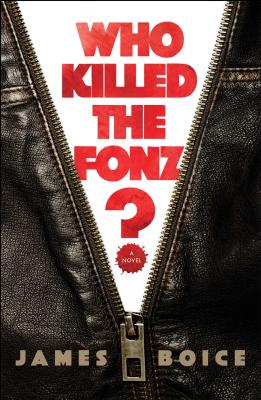 Late October, 1984. Prince and Bruce are dominating FM radio. Ron and Nancy are headed back to the White House. Crockett and Tubbs are leading men everywhere to embrace pastels. And Richard Cunningham? Well, Richard Cunningham is having a really bad Sunday.

First, there’s the meeting with his agent. A decade ago, the forty-something Cunningham was one of Hollywood’s hottest screenwriters. But Tinseltown is no longer interested in his artsy, introspective scripts. They want Terminator cyborgs and exploding Stay Puft Marshmallow men. If he isn’t interested in that sort of thing, his agent tells him, he’s gonna have to find new representation.

Then later that same day he gets a phone call with even worse news. His best friend from childhood back in Milwaukee, back when everyone called him Richie, is dead. Arthur Fonzarelli. The Fonz. Lost control of his motorcycle while crossing a bridge and plummeted into the water below. Two days of searching and still no body, no trace of his trademark leather jacket.

Richard flies back for the memorial service, only to discover that Fonzie’s death was no accident—it was murder. With the help of his old pals Ralph Malph and Potsie Weber, he sets out to catch the killer. Who it turns out to be is shocking. So is the story’s final twist.

Who Killed The Fonz? imagines what happened to the characters of the legendary TV series Happy Days twenty years after the show left off. And while much has changed in the interim—goodbye drive-in movie theaters, hello VCRs—the story centers around the same timeless themes as the show: the meaning of family. The significance of friendship. The importance of community.

Fast-paced and full of nostalgia, Who Killed the Fonz? is an ingenious twist on a beloved classic that proves sometimes you can go home again.

James Boice was born in California in 1982, raised in northern Virginia, and currently lives near Boston. He is the author of MVP and Who Killed The Fonz?

“I must confess that I never watched a single episode of Happy Days during its ten-year run, but reading Who Killed The Fonz? made me wish I had.  Thank you, James Boice, not only for giving us a fast-paced, entertaining novel, but for reminding us in these corrupt Orwellian/Tower of Babel times we live in now, that not so many years ago "friending" someone meant much more than just clicking on a mouse, and that doing the right thing, no matter the risk, was looked upon as honorable and something to be proud of rather than as a sucker’s game.”  —Donald Ray Pollock, author of The Devil All the Time and The Heavenly Table

“James Boice has achieved a magic kind of alchemy, exhuming beloved characters from our collective consciousness and gifting them with a fate, a future, and poignant inner lives. Who Killed the Fonz? is the best kind of pop-culture hypothetical — one that imagines, with heart, wit, and smarts, what happens when the Happy Days fade and real life begins.” — Adam Sternbergh, Edgar-nominated author of The Blinds

"Readers yearning for simpler times will enjoy this trip down memory lane, which is as comforting as an episode of Happy Days." —Publishers Weekly