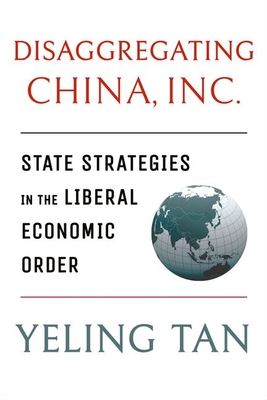 By Yeling Tan
Email or call for price

Set in the aftermath of China's entry into the World Trade Organization, Disaggregating China, Inc. questions the extent to which the liberal internationalist promise of membership has been fulfilled in China. Yeling Tan unpacks the policies that various Chinese government actors adopted in response to WTO rules and shows that rather than disciplining the state, WTO entry provoked a divergence of policy responses across different parts of the complex party-state.

Disaggregating China, Inc. breaks open the black box of the Chinese state, explaining why WTO rules, usually thought to commit states to international norms, instead provoked responses that the architects of those rules neither expected nor wanted.

Yeling Tan is Assistant Professor of Political Science at the University of Oregon. She has published in Comparative Political Studies, Governance, China Journal, Global Policy, Washington Post, and Foreign Affairs.