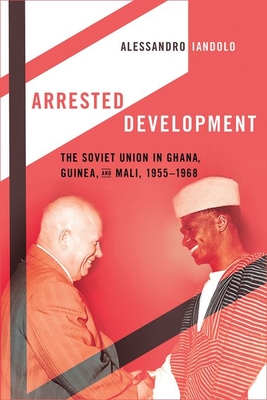 By Alessandro Iandolo
Email or call for price

Arrested Development examines the USSR's involvement in West Africa during the 1950s and 1960s as aid donor, trade partner, and political inspiration for the first post-independence governments in Ghana, Guinea, and Mali.

Buoyed by solid economic performance in the 1950s, the USSR opened itself up to the world and launched a series of programs aimed at supporting the search for economic development in newly independent countries in Africa and Asia. These countries, emerging from decades of colonial domination, looked at the USSR as an example to strengthen political and economic independence. Based on extensive research in Russian and West African archives, Alessandro Iandolo explores the ideas that guided Soviet engagement in West Africa, investigates the projects that the USSR sponsored on the ground, and analyzes their implementation and legacy.

The Soviet specialists who worked in Ghana, Guinea, and Mali collaborated with West African colleagues in drawing ambitious development plans, supervised the construction of new transport infrastructure, organized collective farms and fishing cooperatives, conducted geological surveys and mineral prospecting, set up banking systems, managed international trade, and staffed repairs workshops and ministerial bureaucracies alike. The exchanges and clashes born out of the encounter between Soviet and West African ideas, ambitions, and hopes about development reveal the USSR as a central actor in the history of economic development in the twentieth century.